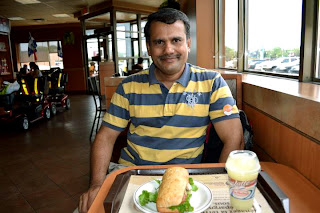 I personally know Giridhara Mallya since last Two years through Facebook. I had the opportunity to meet him and his wife earlier this year at a small get together where he had released the Radio Play 'Dolyaan Khelu' written by my late father Kudpi Vasudeva Shenoy, acted by my Facebook friends and edited-directed by myself. Giridhara is a connoisseur when it comes to quality dining and is a globe trotter par excellence. He has many good things to share with us in the coming days.

A hearty welcome to Giridhara Mallya into the Team of Culinary experts of Kudpiraj's Garam Tawa.

After completing his PUC from Pompeii Jr. College and graduation in mechanical engineering from Mysore University, he joined the Indian Navy in 1985 as a Marine Engineering Officer and has served in various capacities prior to taking up  premature retirement in the rank of Commander in 2007. Since then he is working as a General Manager in Samsung Heavy Industries, Geoje Shipyard in South Korea.

He is married for over 23 years and stays with his wife Geeta in South Korea with his lone son a Computer Science M.S. student in University of Illinois, Urbana Champaign (UIUC) near Chicago. He regularly visits Kinnigoli during the vacations and has published his travelogues in many Mangalorean web portals. He is passionate about traveling (with over 32 countries visited), writing and  Quiz on General Knowledge.
Posted by Rajanikanth Shenoy, Kudpi at 12:50 PM

Email ThisBlogThis!Share to TwitterShare to FacebookShare to Pinterest
Labels: Announcements

Giridhara.....will be waiting for your "Travelogues". Raj all the best on this new venture. You are inspiring me to work on my own website based on my Photography. I dont know when I will be able to start. If you want your own website I have friend who can design for you at a reasonable rate (it will be on "WordPress"). You can have look at my temple website "www.balajisevasamiti.org" which was designed by him. let me know if you are interested.

Commander saab has seen the world and with his excelent photography and travelogues sharing made his friends a virtual touring of many of the best places around the world..:)
big cheer for Com. Giridhar Mallya....:)

Thank you Vivek for the encouraging words. All the best to your own website on photography. Do it soon.

I am happy with this blogspot for the moment Vivek. As long as this is listed in google, people can reach my recipes easily :-)