"Rajani Maam, would you like to have some coffee?" Arun asked me as I relaxed in the sofa seat of his home in Kottara Chowki on September 19th, last year.

"Not at this hour. I normally avoid coffee after dark!" I replied.

Visibly disheartened, Arun reiterated that it was not usual coffee, but something unique he had brought from during his recent visit. He said it is Kopi Luwak which is much different from how they process coffee.

I was about to say no again, but I exclaimed aloud, "Kopi Luwak? I think that sounds familiar and I think I have read about it somewhere before! Is it by any chance coffee processed from coffee fruit consumed by Civet Cats?"

"Oh you seem to know everything Rajani maam! I was talking about exactly the same coffee. Kopi Luwak is nothing but coffee processed from beans obtained from the Civet Cats! It is very expensive, but I feel lucky being gifted a pack of the unique coffee powder by an associate in ! The pack is still unopened, and I wanted to consume it with someone special. Let us have Kopi Luwak!"
I was thrilled to hear about something which I had never ever expected to taste in my life! Yet, a whiff of slight apprehension shrouded my mind that the coffee is processed in a strange and weird process, which normal humans with sensitive taste and slow response to acquired taste may not relish!

As we went deep into discussion about the coffee, a strong aroma of coffee emanated from the kitchen where Arun's beloved wife Nishita opened the pack of Kopi Luwak and wafted into the hall, reaching our nostrils at almost 25 feet away! Both I and Arun exclaimed in disbelief about the divine aroma of the product.
Nishita came with two cups of coffee and its pale colour sort of disappointed me, thinking about the strong and dark South Indian filter coffee we consume regularly at home. As I took a sip, an array of flavours danced on my taste buds making me forget every negative thing I had thought about the coffee!

That light coloured sweet aromatic coffee had won my heart with its unique taste at the very first sip, and there I was, one of the luckiest people on earth having tasted the legendary 'Kopi Luwak'.
Dr. Arun Isloor is Associate Professor in Chemistry department, NITK, Surathkal. He is my brother in law Dr. Suresh D Isloor's nephew and son of Mohan D Isloor and Sheela M Isloor from Sirsi. He is married to Nishita, a scientist turned home maker. The couple have two sons, Nishant studying in high school and Anway in primary school. Dr. Arun has travelled extensively in connection with research on membrane technology for purification of water. He tours the Orient often and writes about food and culture of the places he visits. His articles have appeared in Kannada magazines, mainly 'Sudha'. 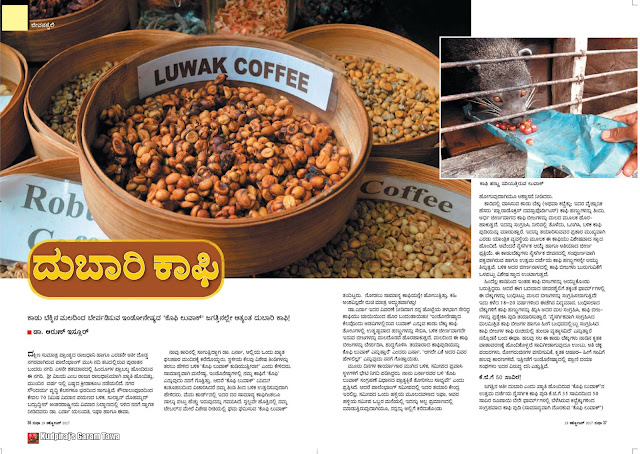 , the second biggest port city, also the capital of stands over the banks of River Musi. In the Seventh Century, this city was dominated by the Hindus and was ruled by a king named SriVijaya. Next Asian Games will be held in this city. Beautification of the city is in progress. After travelling by a short flight of 70 minutes from Kualalampur landing at the , I was received by Dr. Yerna Yaluvati, Epha and Eva.

On the way, Dr. Yerna took me to a famous restaurant. After ordering some of the popular local snacks, she asked me, "Would you like to taste Kopi Luwak?"

Until then, I knew that in they called coffee as 'Kopi'. Out of curiosity, I asked about Kopi Luwak. She told me that she will tell me about it after I finished consuming the snacks!

I didn't fail to notice that the price of a cup of Kopi Luwak was more than four times that of normal coffee!

Minutes after I consumed the snacks, strong aroma of Kopi Luwak greeted me in a cup on the table. Though it looked like normal coffee, it had no bitterness but had a wonderful smooth taste!

As Dr. Yerna explained me about Kopi Luwak, the coffee I had consumed almost came back to my mouth! Luwak, a kind of Civet Cat consumes the coffee fruit and excretes the beans along with the faeces. Those beans are separated from the faecal matter, cleaned and processed to make coffee powder named as Kopi Luwak!

I now knew why Dr. Yerna didn't explain about it in the beginning!

After the 3 day workshop, they had arranged for visit to nearby tourism spots. I asked Dr. Yerna if a demonstration on collection of Kopi Luwak can be arranged. But, had no such processing center. However, Epha told me that in a village near her hometown, someone is manufacturing this kind of coffee in a tiny scale, and she was ready to take us there, to show the demonstration.

Civet Cat or Jungle Cat (Scientific name: Paradoxurus Hermaphroditus) consumes ripe coffee berries and excretes undigested coffee beans. These beans are collected, washed thoroughly and sun dried. Then the beans are processed and ground into coffee powder. The technology involves two natural processes that is natural choice of ingredient and ultimate digestive process. Civet Cats pick only the select ripe berries for consumption. Then the beans are subject to second process during digestion that is fermentation of the consumed beans, adding maturity and unique flavour to them.

In the olden days, natives used to collect these beans from the deep forests and process them. In the changing scenario, since last 18-20 years they rear the Civet Cats in farms in cages, feed them with select ripe berries and obtain Kopi Luwak.

"Coffee beans collected naturally from the jungles are far superior in taste and flavour than this method", says Epha who accompanied me.

Many a times, the cats die due to inability to get adjusted to artificial environment, epidemic caused by not maintaining hygiene, congested cages and overfeeding of artificial food. Of late, animal care organisations have been raising voices against this.

Naturally obtained best grade 'Kopi Luwak', supposedly the most expensive Coffee Powder in the world, is priced anywhere from Rs. 35000/- to Rs.50000/- per Kilo. The ones processed in farms cost between Rs.5000/- to 7000/-. Its production is found mostly in Java, Sumatra, Bali and Sulawesi islands and in a small way at parts of and .

When Coffee plantations were developed in , Kopi Luwak was also produced. Dutch colonials brought coffee from and started growing coffee as commercial crop in some parts of . They had full hold over coffee production; they controlled the workers, not allowing them to even taste the coffee they grew! So the workers had curiosity to taste it. They also observed that Luwak cats were consuming coffee berries and excreting coffee beans. They thus found a way to obtain coffee beans by washing and drying the excreted coffee beans and preparing coffee powder with their own methods. Then the aroma of Kopi Luwak attracted the Dutch, and they too became addicted to it.

There are many controversies regarding Kopi Luwak and its supremacy. Those pioneers in coffee industry don't agree that Kopi Luwak is the best coffee in the world. They say it maybe the most expensive and maybe having unique taste and aroma, but never the best coffee!

I also contacted via email Dr. Maximo Marco of , who has done extensive research on Kopi Luwak. According to Dr. Marco, digestive enzyme ‘Protease’ secreted within gastric mucosa of the Luwak cats gets absorbed into the consumed coffee beans, converting the proteins within the coffee beans into peptides and amino acids. Later when these beans are roasted, a process called "Millard Browning" takes place and that imparts a great flavour to the roasted beans. Same process can be observed in bakeries while baking breads and cookies, which gives a unique aroma to the dishes.

Subject to 24-36 hours of digestive process within the digestive system of the Civet Cats, the coffee beans get party sprouted, and thus they lose their bitterness to a great extent. Scientists in Florida USA have successfully achieved this artificial partial digestion process in labs and have obtained patent! Some companies in have dipped coffee beans in enzyme solution to obtain fake Kopi Luwak.

After getting information on Kopi Luwak from Epha, she took me to a nearby village and we went in search of a man named 'Agung'. In the backyard of Agung‘s house, in a shack there were around 4-5 cages. Agung told us that some days ago two Luwaks could not get adjusted to the cages, and they died!  They were caught using a trap just 15 days ago in the jungle where they moved freely, but it is indeed a misfortune, they could not sustain the congested 3'x3' cages in which they were imprisoned!

A sudden idea flashed to my mind. I recalled having witnessed Civet Cats running around the yard of our old Sirsi house, consuming fruits from the 'Fishtail Palm(Baini)' in our neighbour Prabhu's compound and excreting the seeds.

"Is it possible to make coffee from Baini Seeds?” I wondered!

I asked Agung if they are fed only Coffee berries or other food as well. He told me that they feed them bananas, jaggery and rice apart from coffee fruit.

From one Luwak, they obtain around 30-80 Gms of wet coffee beans. Every morning they collect the faeces, and then they wash them thoroughly to separate the coffee beans. Further they dry them in the sun, roast them to a certain level and then grind them into coffee powder in a mortar by manually pounding. Such process involves no machines, the process is laborious, and thus the coffee is very expensive.

While I was discussing about Kopi Luwak with Agung and clicking the pictures, his wife offered us homemade Kopi Luwak. I found its taste and flavour more exotic than the Kopi Luwak I had tasted at the restaurant on the day of my landing in .

In recent times, and other countries charge the travellers some fee and show them around the 'Luwak Kopi' farms. However, the way selfish humans with profit motive rearing those innocent cats in cages and subject them to pressure for obtaining coffee beans did not appeal to me.
Posted by Rajanikanth Shenoy, Kudpi at 8:45 PM 1 comment:

"Wishing You all A Very Happy and Prosperous Year!" 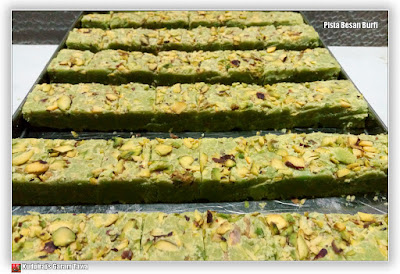 Posted by Rajanikanth Shenoy, Kudpi at 12:26 AM No comments: