About the author:
Mahesh Nayak is a journalist, creative writer and graphic designer by profession, located in Mangaluru. Hailing from the famous Bovikana Nayak family, he has studied life and living style of various cultures. From his schooling days, he has been writing articles which have been published in various books, magazines, journals and newspapers. His articles and graphic designs reveal a touch of class, while taking us into the reality of virtual world.

Though we are living in the same locality, I came to know Mahesh just 6 years ago. Mahesh is at least a decade junior to me, his writing abilities and his penchant for good food and living have brought him closer to me. He loves traditional foods and has a good knowledge of GSB style food and ingredients. Mahesh has travelled widely and has left no stone unturned, when it comes to sharing his experiences.

His pastimes are mainly reading, writing true stories and poems, petty adventures, animal care, video documentaries, studying flora and fauna and socialising with creative groups. He has been the executive editor of Mangalore Today print magazine since many years. He runs Iris Design & Communications, an advertisement and designing consultancy in Kodialguthu East, Mangaluru.


This is Mahesh's first article for Kudpiraj's Garam Tawa. In this article, he has reviewed the Balochistan Food Festival which is running at the Ocean Pearl, Mangaluru. I am sure, it will enthrall the readers while taking us into a virtual journey through the colours and aroma of the lavish Balochistan spread.

Thank you Mahesh for the inputs. 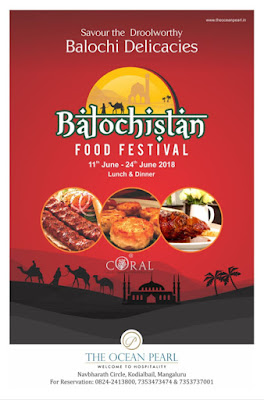 Balochistan could well have been Timbuktu. Hardly anyone even knew it existed on the map. But it’s been in the news lately for political reasons, the result of which is a food festival at Hotel
Ocean Pearl. Balochistan Food Festival, I suspect, is a brain child of the hotel’s marketing department, which would have instantly smelled an opportunity to please the guests with the region’s new found mystique.

Balochistan is the largest of Pakistan’s five provinces and is wedged between Pakistan (which it hates), Afghanistan, Iran etc. That’s as bad as life can get. Much of its cuisine has to do with roasting direct on fire and some say it’s the birth place of kebab. Anyway I was sufficiently excited by the idea of the festival and decided to check it out.

Coral Restaurant, the venue of the food festival wore a festive look with cutouts of camels and enticing displays of sacks full of grains and spices. The festival features a-la-carte menu. Unfortunately I had only me to order for and I had to choose carefully. True to Balochistan’s reputation, most of the food items were of Tandoori lineage and there was good choice between fish, chicken and lamb preparations along with some treats for the veggies too. 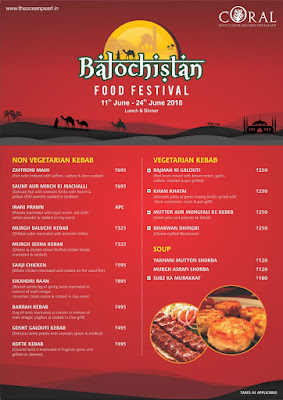 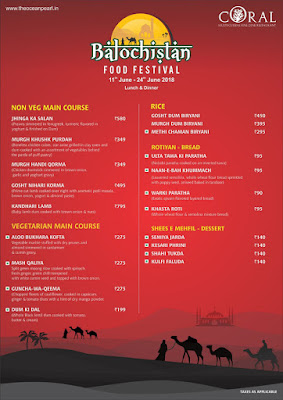 I decided to begin with soup and asked for a Murgh Asrafi Shorba. It was good. This I followed with Saaji Chicken, which is supposed to be a popular dish. Normally a whole chicken is roasted. Here I was served with four roasted chicken thighs. Though tasting a bit unfamiliar it was good to eat – maybe the strangeness is because the spices and herbs used in the masala are alien to us. For main course I asked for Murgh Dum Biryani, which was a mix of white rice and coloured rice with two chicken pieces thrown in. It was delicious, but not much different from Coral’s regular Biryani. For dessert I had Kesari Phirni, which was also good.
Balochistan Food Festival is worth a try. The price is reasonable and the quantity is generous. The taste might seem unfamiliar, but after all it’s supposed to be from an unfamiliar place.

When it comes to food festivals it’s a good idea to go as a big crowd as you can try out many more dishes. I was trapped into a solo position. Hence I had to order very little and still parcel about half the stuff.

A footnote: My lunch was actually a treat from my rich friend Abdullah who could not join in the feast as he was fasting for Ramzan. The dude not only suffered the torture of witnessing me gobble to glory on an empty stomach, but also paid the bill without a second thought. Here is a photo of my friend commanding his portion of the table. 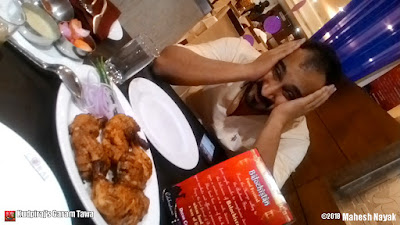