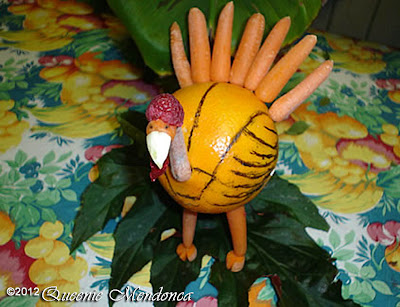 The first thanksgiving feast was celebrated for three days in the fall of 1621, at the end of the harvest by the Pilgrims.  George Washington is the first president to proclaim the first 'National Day of Thanksgiving' in 1789.  Finally, after a 40-year campaign of writing editorials and letters to governors and presidents, Sarah Josepha Hale's obsession became a reality when, in 1863, President Lincoln proclaimed the last Thursday in November as a national day of Thanksgiving.

Normally private offices are closed on Thursday and Friday, whereas, most of the Government offices are open on Friday.  Many stores have massive discount sale day after

Thanksgiving and it is called black Friday.  Many people camp out as early as 3am  before the store opens to buy the special discounted and limited items. 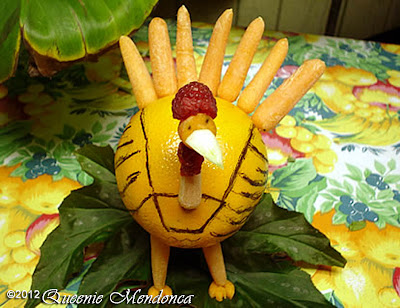 Pumpkin pie is one of the desserts eaten on Thanksgiving Day.  Keeping pumpkin and turkey in mind, I decided to carve a pumpkin.  Having a shortfall of pumpkin this year, I was not able to find any pumpkin.  Not knowing what to carve for Thanksgiving without a pumpkin, finally, the following idea came to my mind.  First thing came to my mind was carrots and orange, and I decided to create my own Turkey!!

I have used one orange, 12 baby carrots, two raspberries, one garlic clove, and toothpicks. 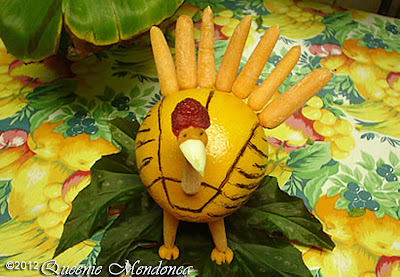 Wishing all of you Happy Thanksgiving!
Posted by Rajanikanth Shenoy, Kudpi at 11:28 AM