Gulla or a special variety of matte green Brinjal grown in paerts of Udupi District of coastal Karnataka is as important to localites, as the Udupi Krishna Mutt is. This brinjal if cultivated with the same seed in other parts of the Earth, you can not get exactly the same taste and texture as Gulla grown in and around Udupi! The taste and texture of Gulla makes me believe that this is a unique vegetable grown only in parts of Udupi and the soil as well as the weather are responsible for making these gullas matte in texture and sweet in taste. There are mainly two kinds of gulla available in the season that starts from autumn, till summer. Perampalli and Mattu(Matti) Gulla. Both are tasty but Matti Gulla is more tasty and is much sought after. It is also a must in daily preparation of curries in Udupi Mutt.

As per Wikipedia, there is a story behind Gulla, which I don't know whether fact or fiction.

'Shree Vadhirajacharya, a monk ('swamilu' in tulu), was daily offering food to Hayagreeva or Hayavadhana (Narayana in Horse's face). He used to close the door and a horse steps up on his shoulder to eat it. Vadhirajaru used to return empty vessel always. This enraged other brahmanas, and in turn they mixed poison, thinking that Vadhirajaru has eaten it, as usual he offered food, the horse came and ate fully without leaving a trace. But to their surprise, other Brahmins saw Shri Krishna, Udupi's Idol turning blue in color. So other brahmnas felt guilty and went to Vadhirajaru for pardon. Vadhirajaru with his divine powers gave some seeds of Brinjal to Mattu Brahmins to sow it. The brinjal grown there is bought and being offered to Krishna as Nayvedhya. Slowly the blueishness vanished away. So even now "Mattu Gulla" is famous for non-septic in nature.' - Wikipedia 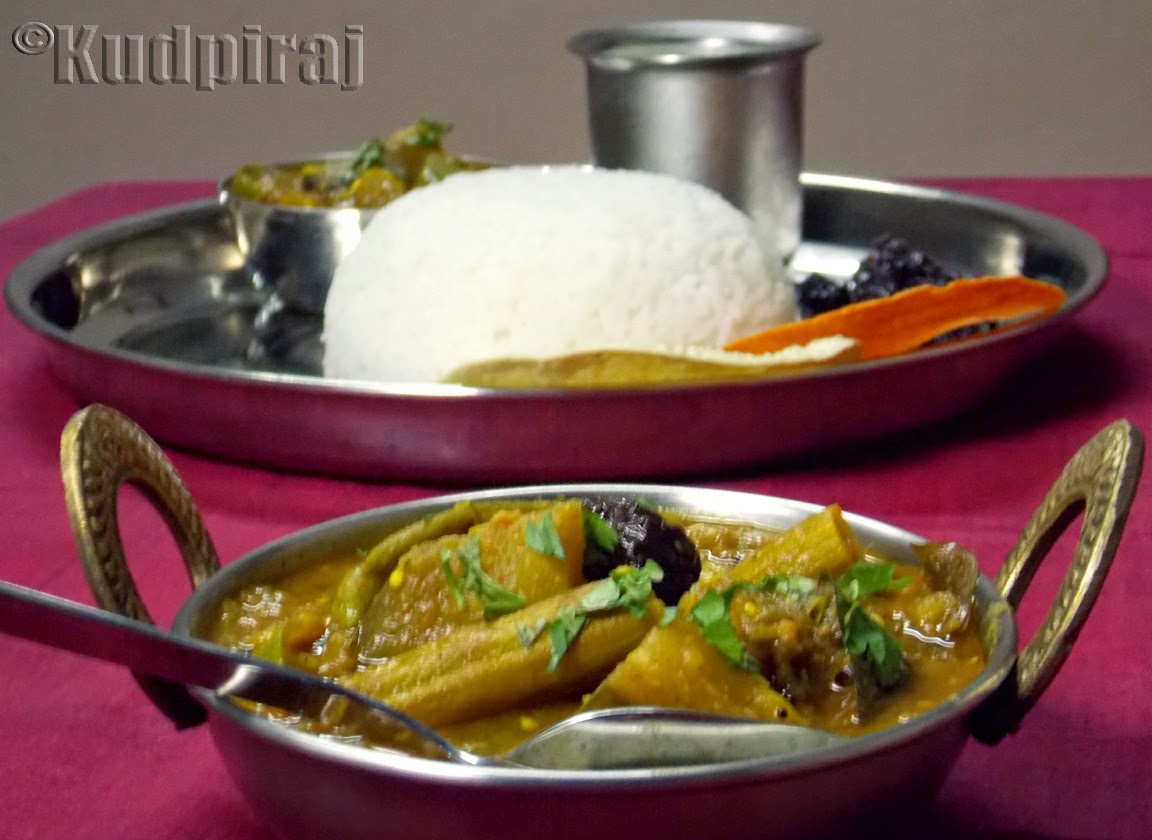 Gulla is a wonderful vegetable that is widely used in local preparations like Sambar, Ennegaayi(Puddi Saglen), Bharta, Bajji, Gojju, Fritters(Podi), Thalaasani and a lip smacking curry that goes with steamed white rice called Bolu Huli or Mudde Huli. In Udupi Brahmin lingo, bolu means mushy or sticky and huli means sambar. In Tulu they call this Bolu Koddel. This was formulated by the Temple chefs of Udupi Hundreds of years ago and this is one of the delicacies they serve in the Mutt as prasadam for feast. Nearby, a famous restaurant by name 'Mitra Samaj' also serves this wonderful curry. I first tasted this bolu huli way back in the Sixties when I was on a school trip and then we had lunch at Mitra Samaj in Udupi. Later when I visited the Krishna Mutt with our family friends in the Eighties, I wanted to have the feast in the mutt to taste this curry, but there was heavy rush and we had to go to Mitra Samaj and have our lunch. We were not disappointed! We had that extra serving of Bolu Huli at Mitra Samaj and needless to repeat that it's lip smacking, finger licking good! I also found excellent Bolu Huli prepared by the 'Bhatre' who ran a small Udupi meals joint called 'Sharada Bhavan' in Manipal in the Seventies. He served inexpensive meals with Bolu Huli as one of the signature dishes. My colleague in bank Huruli Ramachandra Rao also got Bolu Huli for me prepared by his wife at home a few times when he came to know that I am a fan of Bolu Huli, which he called 'Mudde Huli'. Mudde Huli is the term used by Kannada Brahmins, especially from Kundapur side.

Udupi Mutt cooking mainly is based on Black Pepper based masala for the Seers but of late they also use green chillies and red chillies, especially for prasadam feast they serve to the public. The history clearly mentions that chillies were brought to India by the Portuguese, and before that we in India never grew chillies or tomatoes. It is also interesting to note that Gulla, Tomatoes, Chillies and Capsicum belong to the same family, though taste wise they are much different!

Gulla is available in abundance right now and I was searching for authentic Udupi recipe to make it. We had tried making this once long ago following a book by a Udupi Brahim but the outcome of that recipe was not good. It lacked something. Online recipes that I found were just a handful but I was lucky enough to find a convincing one in the blog 'Udupi recipes'. I made some changes to suit our need, such as:

1. The recipe mentions adding raw curry leaves while boiling gulla. I skipped this, as smell of raw curry leaves is a turn off for me.
2. Udupi Sambar powder was not in stock. We get excellent samabar powder from Panchmal's Shop Car Street Mangalore, which has added roasted grated coconut. That is on par with Udupi sambar powder and I added that.
3. Asafotoeda(Hing) is to be added to the curry directly, but I added it in the seasoning for better taste and aroma.
4. Drum sticks blend well with gulla. So I added one drum stick per gulla for better taste.

This should be served with steamed rice and preferably with pappadams or chilli happalms and lemon pickle as per typical Udupi Thaali but you can also relish this with poori, chapati, akki rotti, neeru dosa or with semiya(string hoppers). Once you get the taste of real Udupi style Gulla Bolu Huli, you will never settle for anything less! 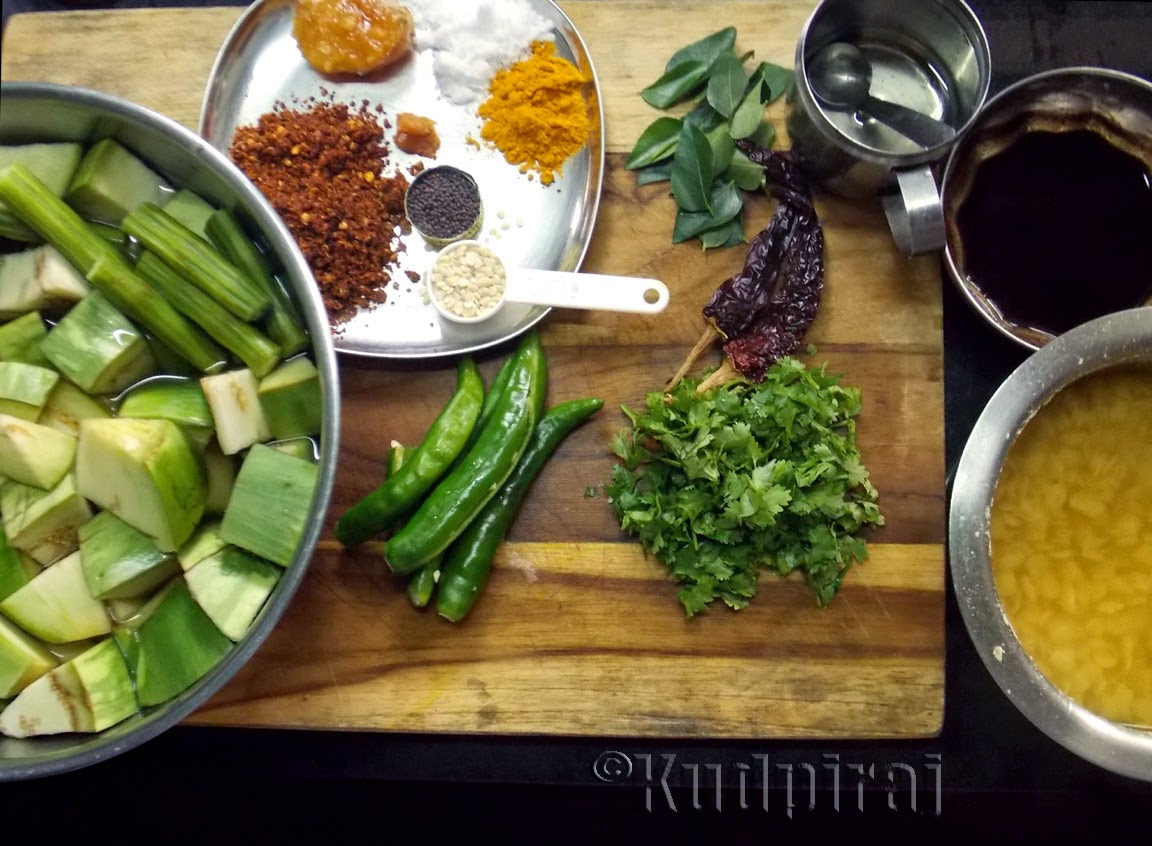 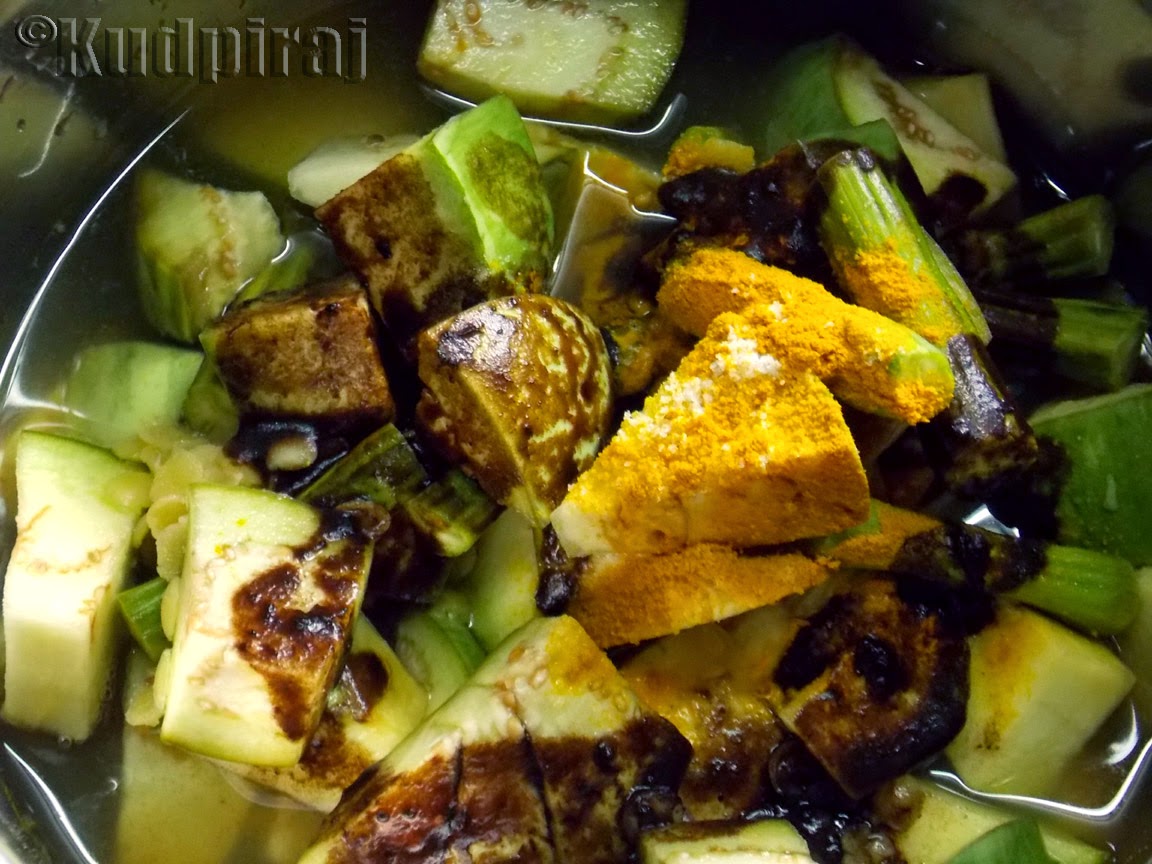 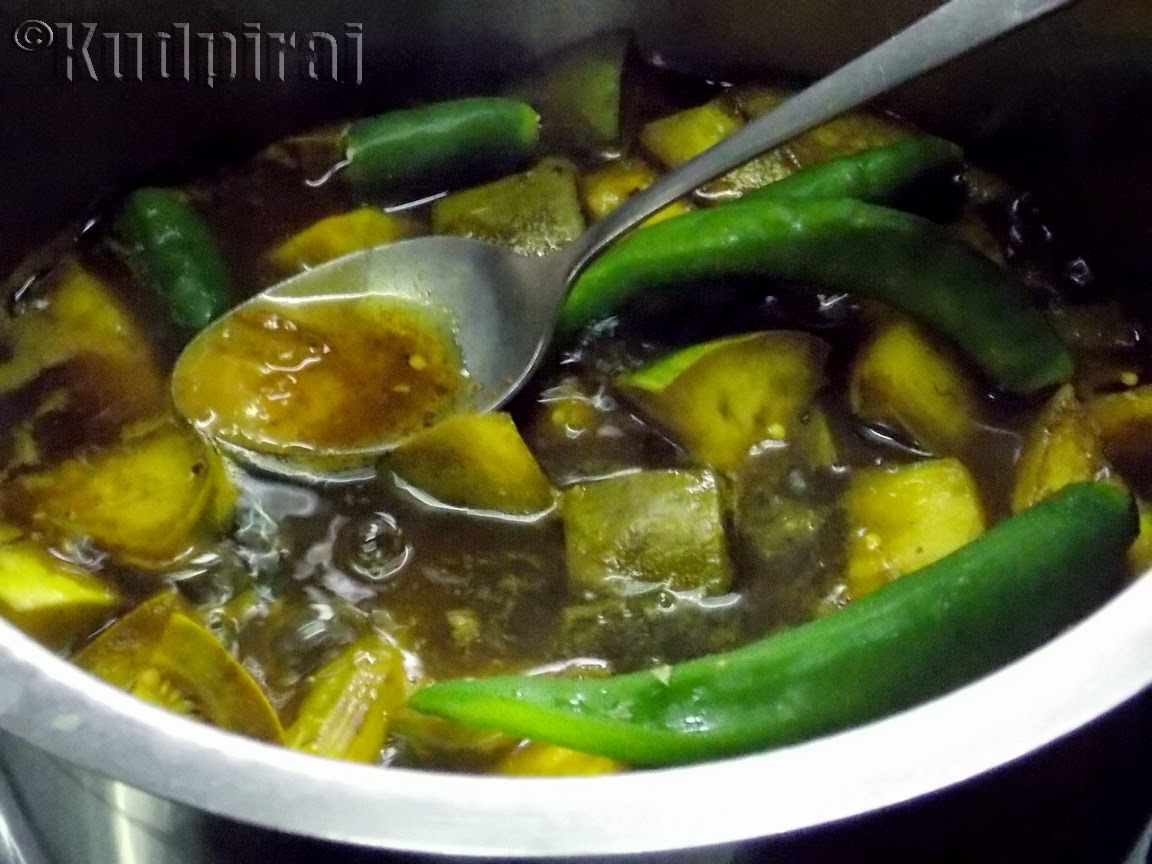 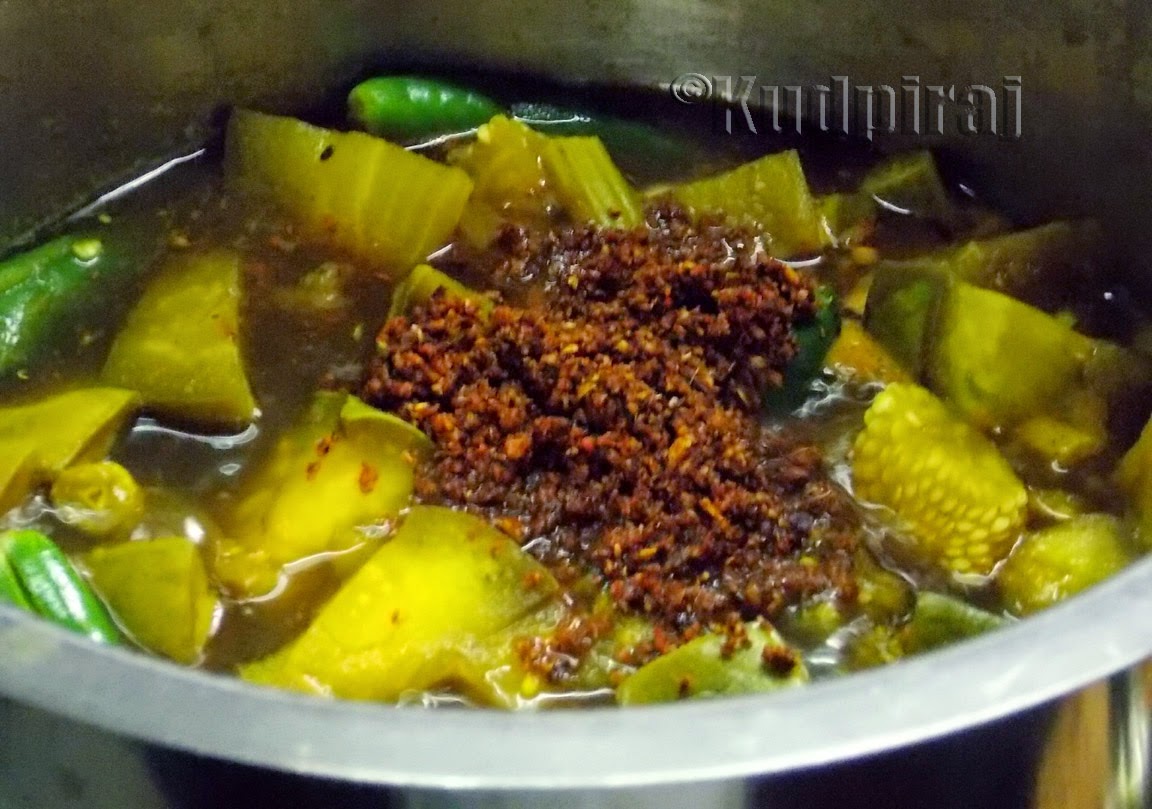 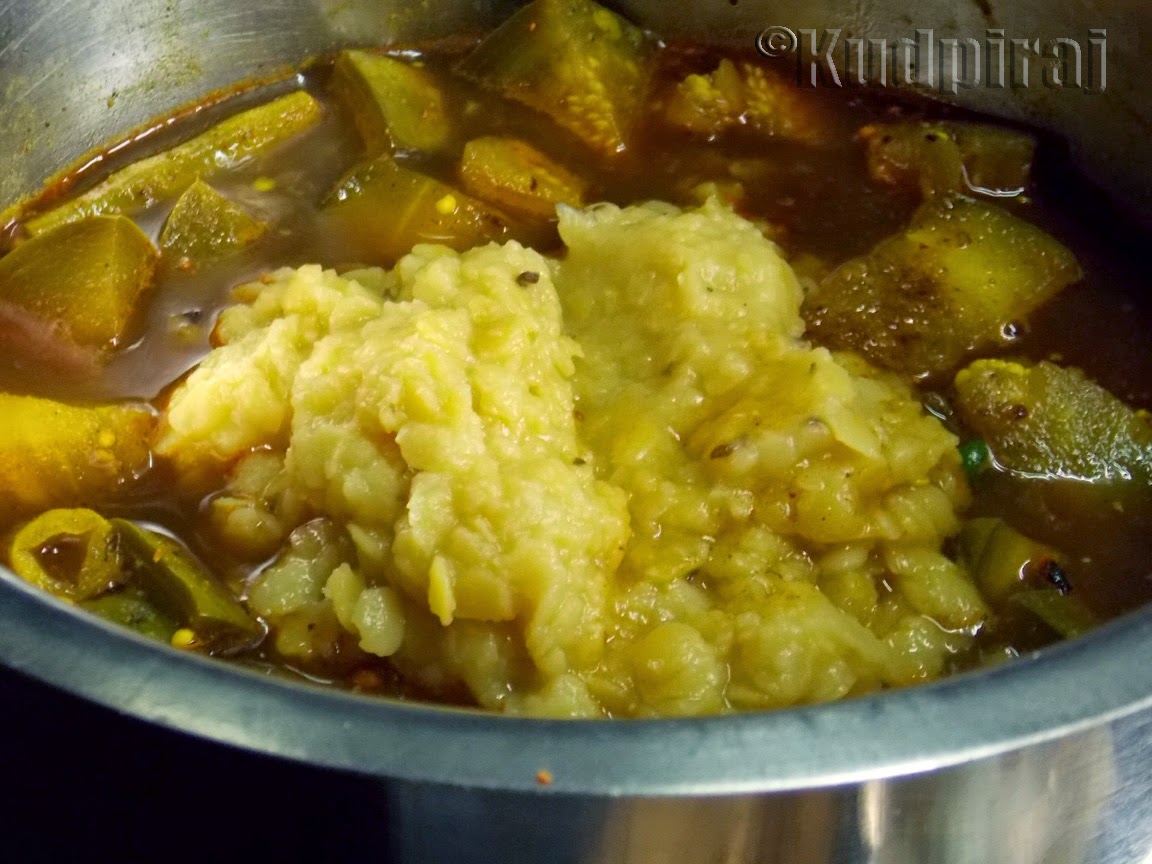 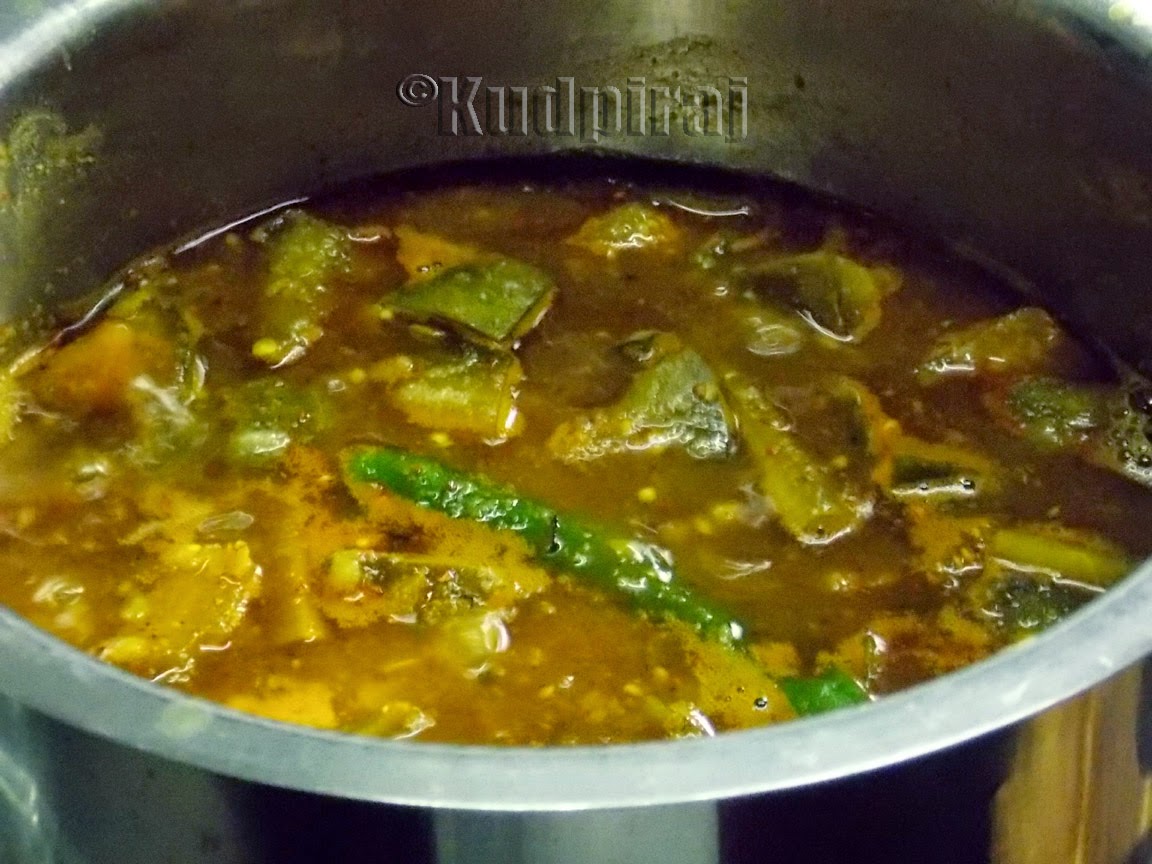 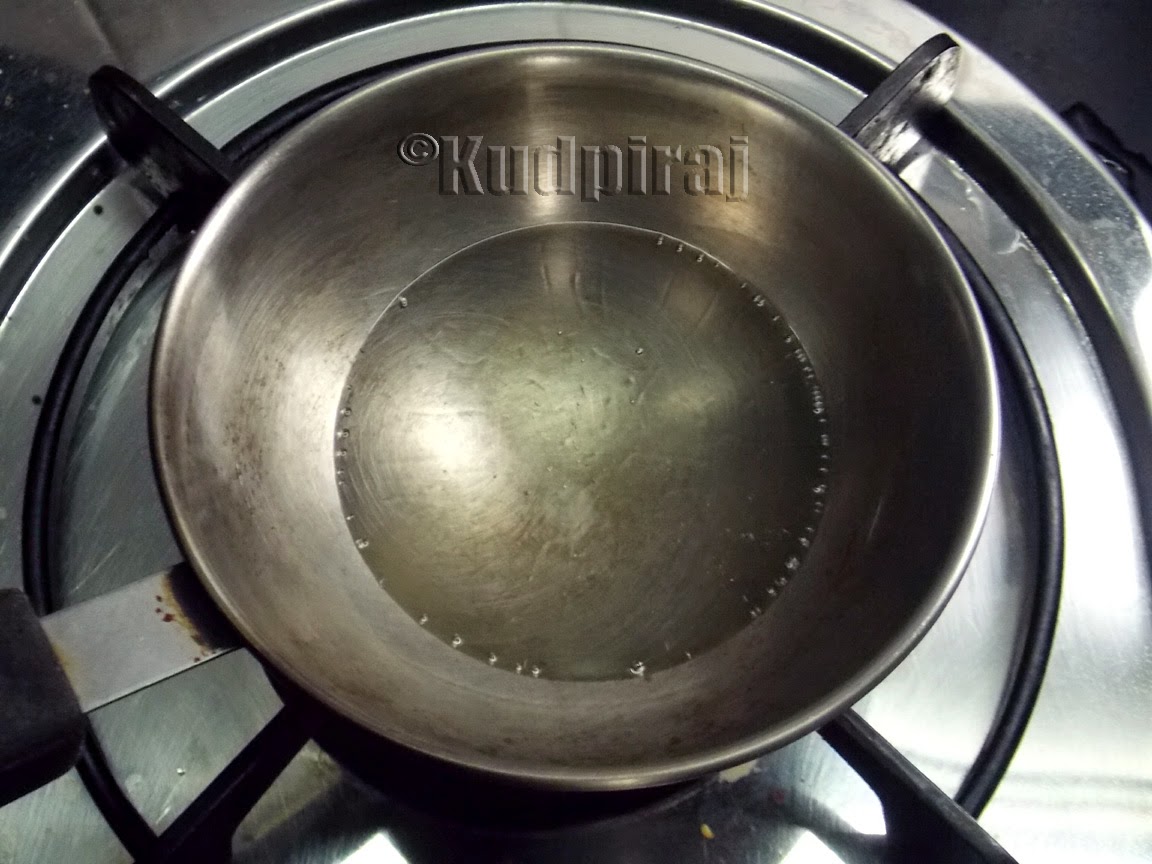 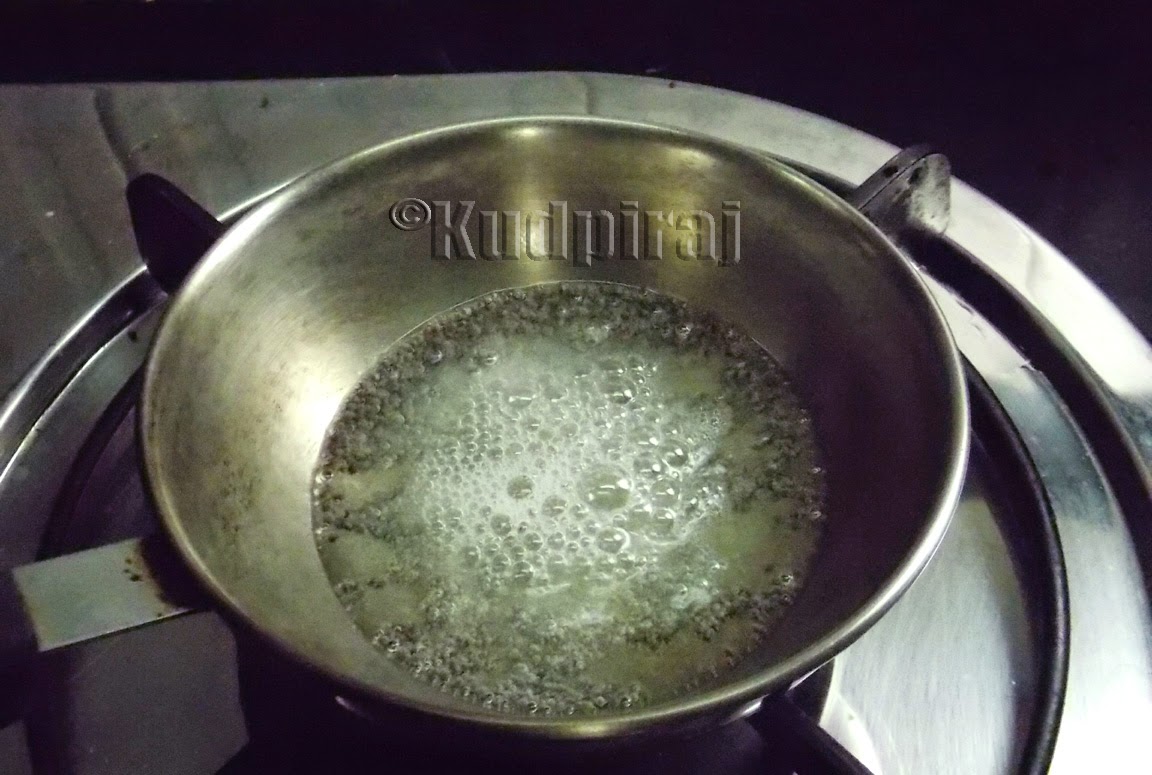 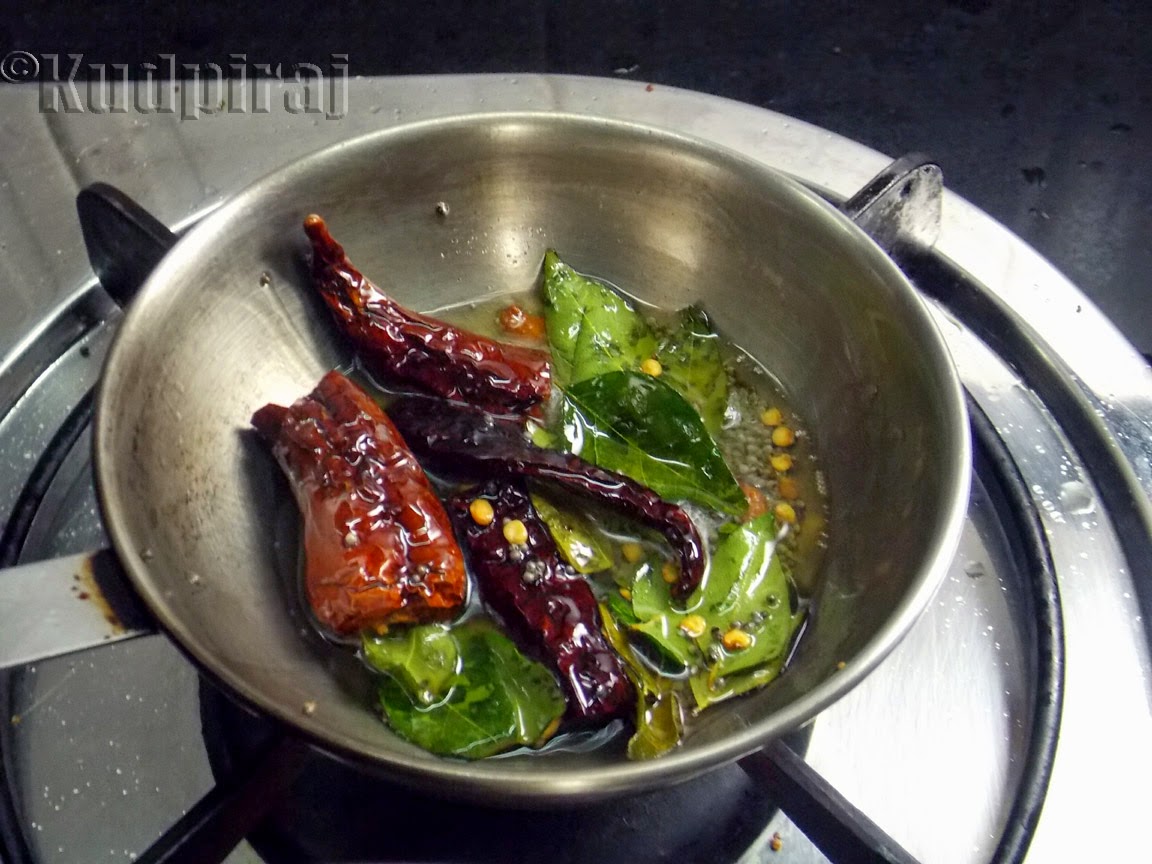 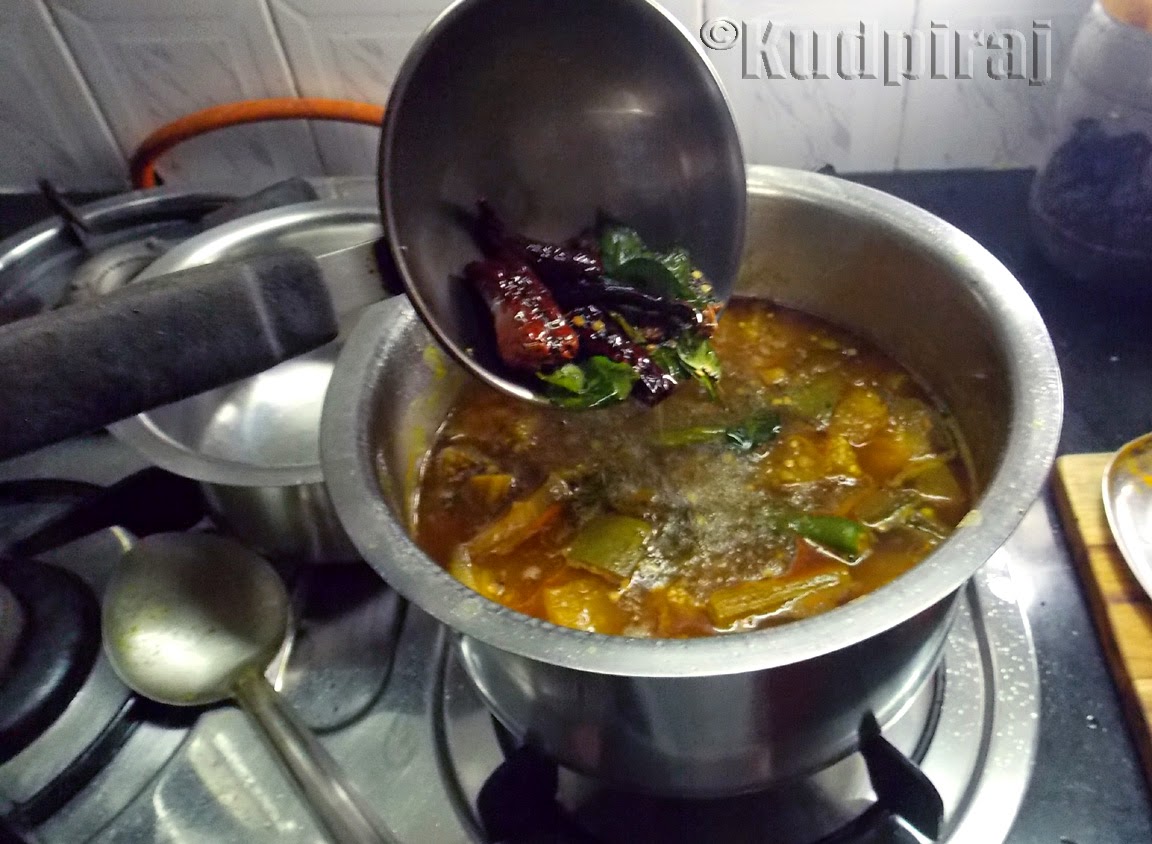 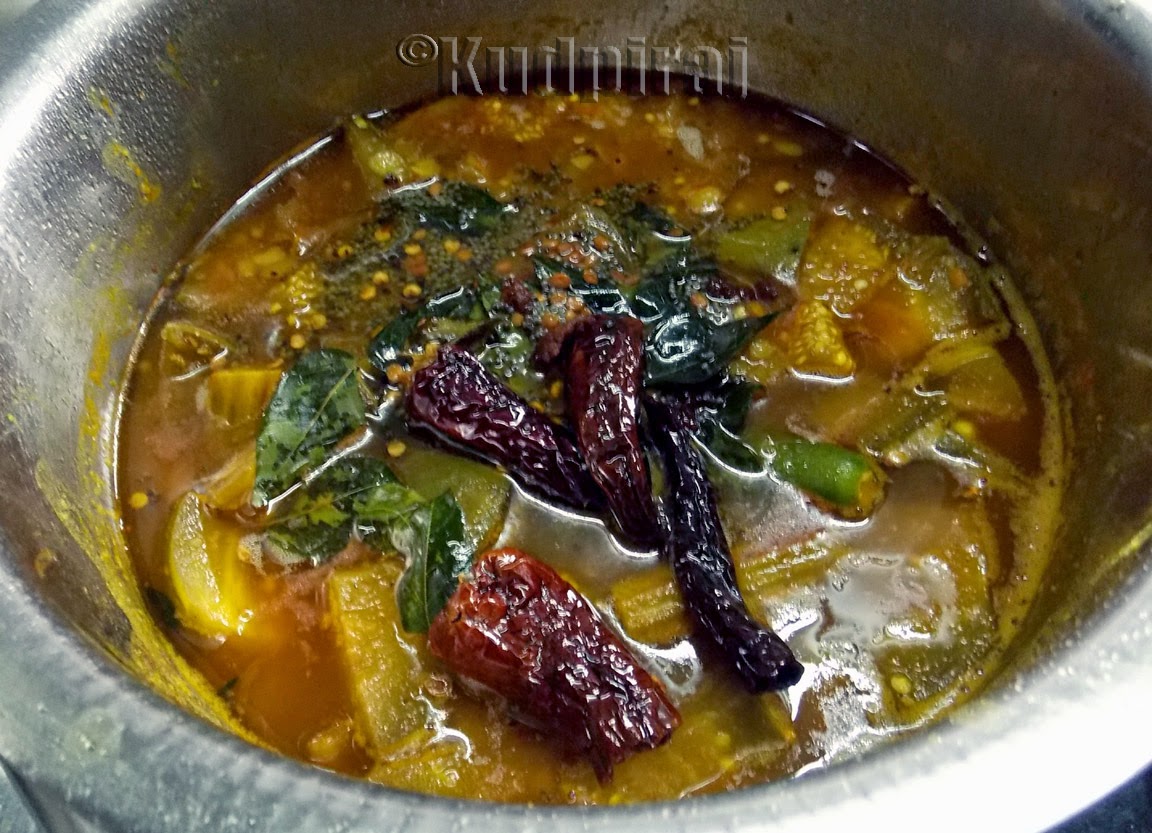 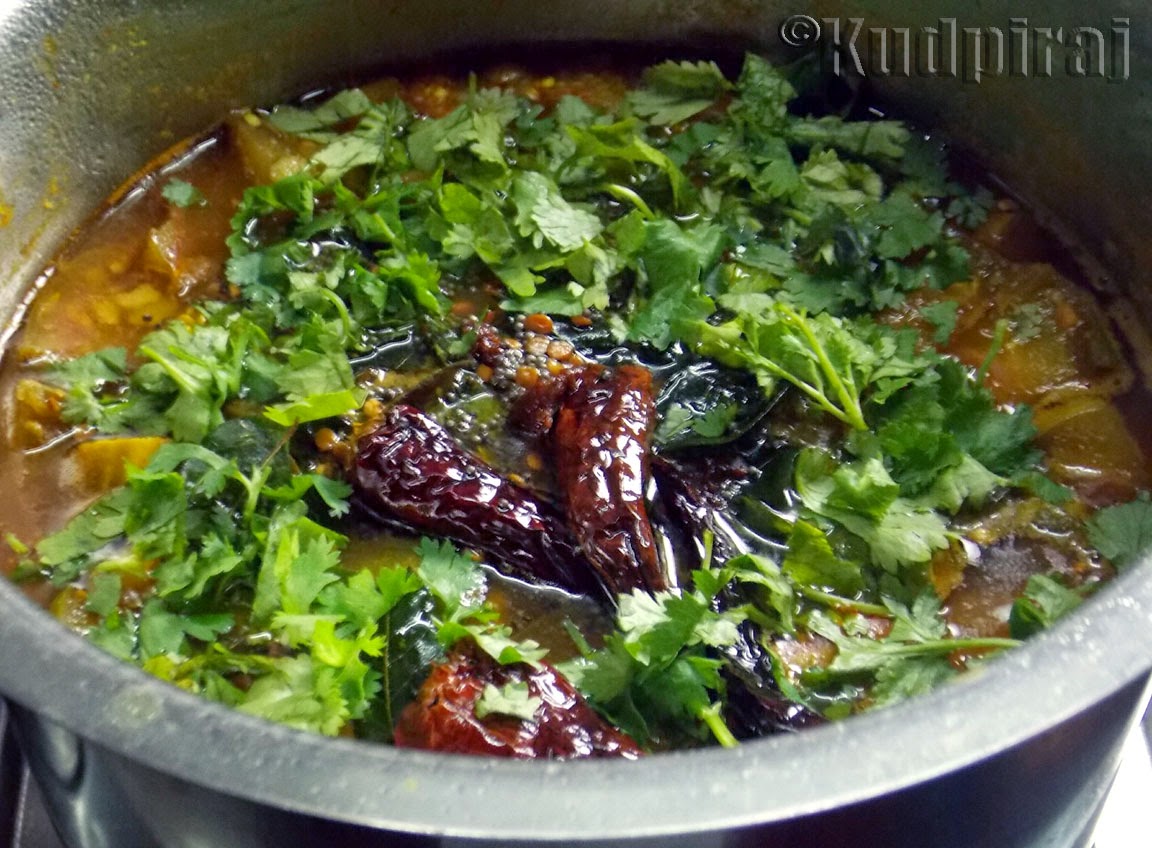 Method:
Wash and remove the stalk of gulla and chop along with skin into 1" cubes and drop in sufficient water.
Wash, shave and chop drum sticks into 2" long pieces and drop into water.
The above step of dropping them in water is essential to remove any bitterness within gulla and drum sticks.
Pressure cook toor dal and mash lightly with a ladle.
Drain the gulla and drumstick pieces.
Boil gulla and drum sticks with salt, turmeric powder, tamarind pulp and just enough water(Around 1 cup) for 7 minutes or till 3/4 cooked.
Add powdered jaggery, green chillies.
Add mashed cooked toor daal.
Add water to adjust thickness of gravy.
Gravy should be thick and sticky, not too watery.
Add Udupi sambar powder and bring to a boil.
Gulla pieces should cook perfectly for better taste, stiff and soft, but not mushy.
Check for salt and switch off the flame.
Add seasoning and chopped coriander leaves.
Serve with hot steamed white rice and pappadams. 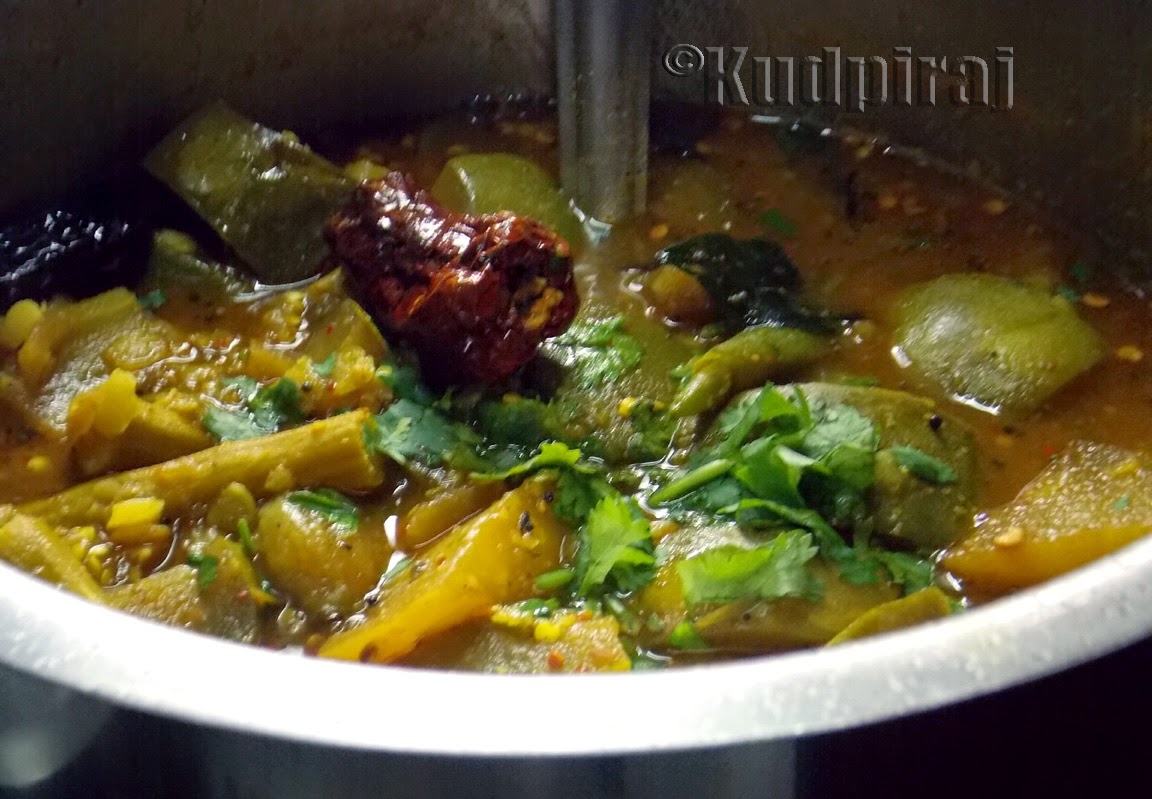 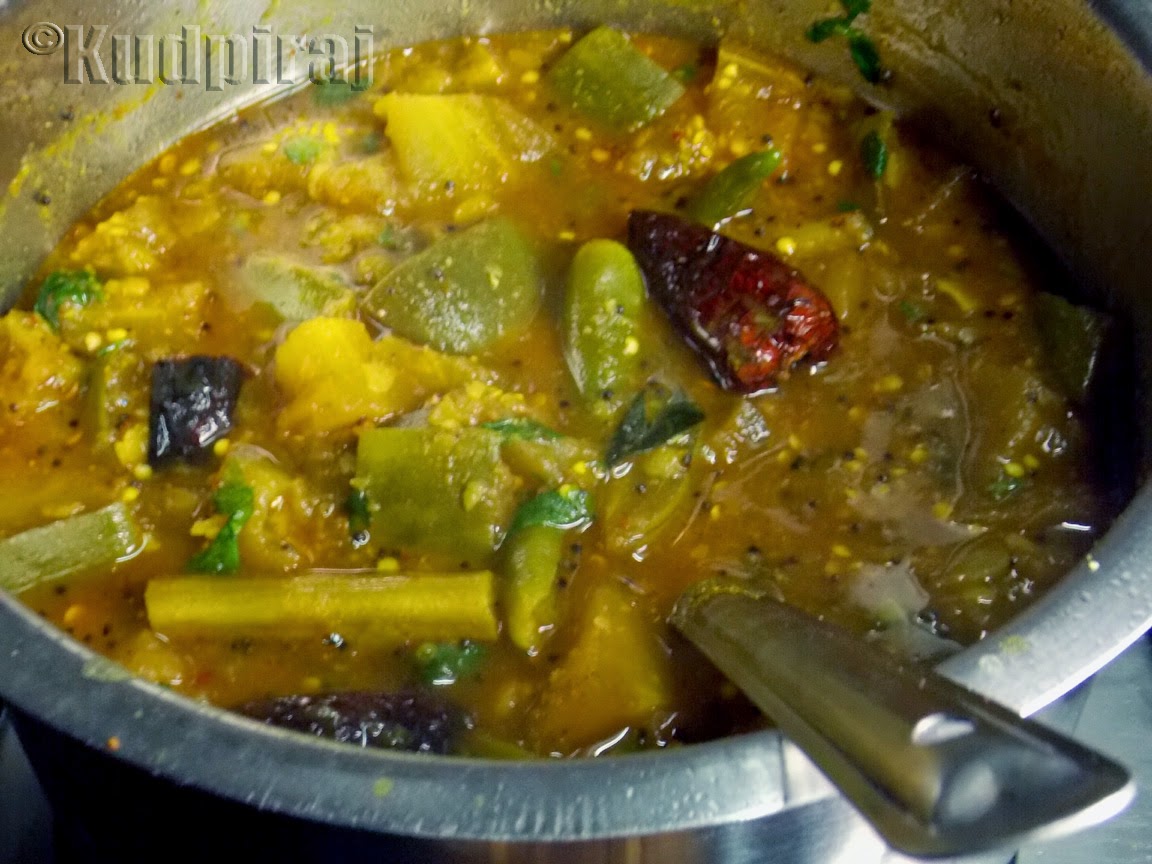 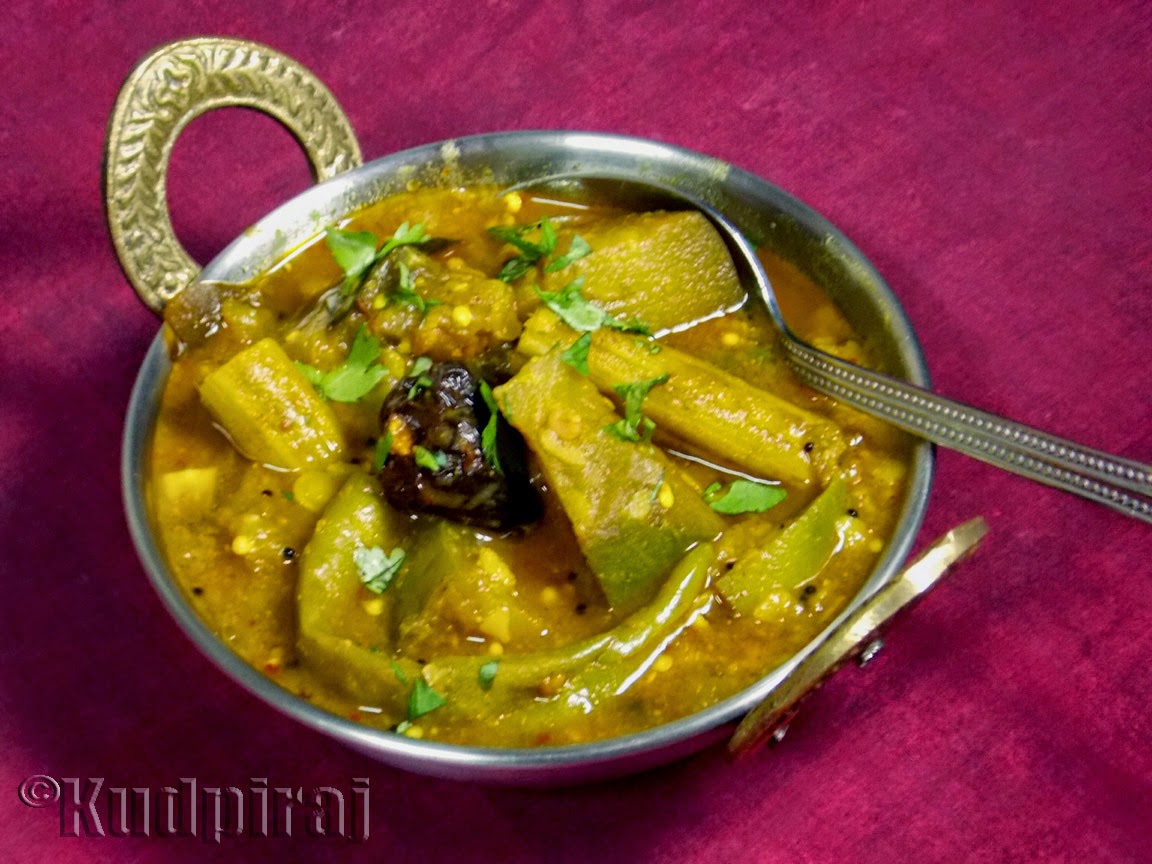 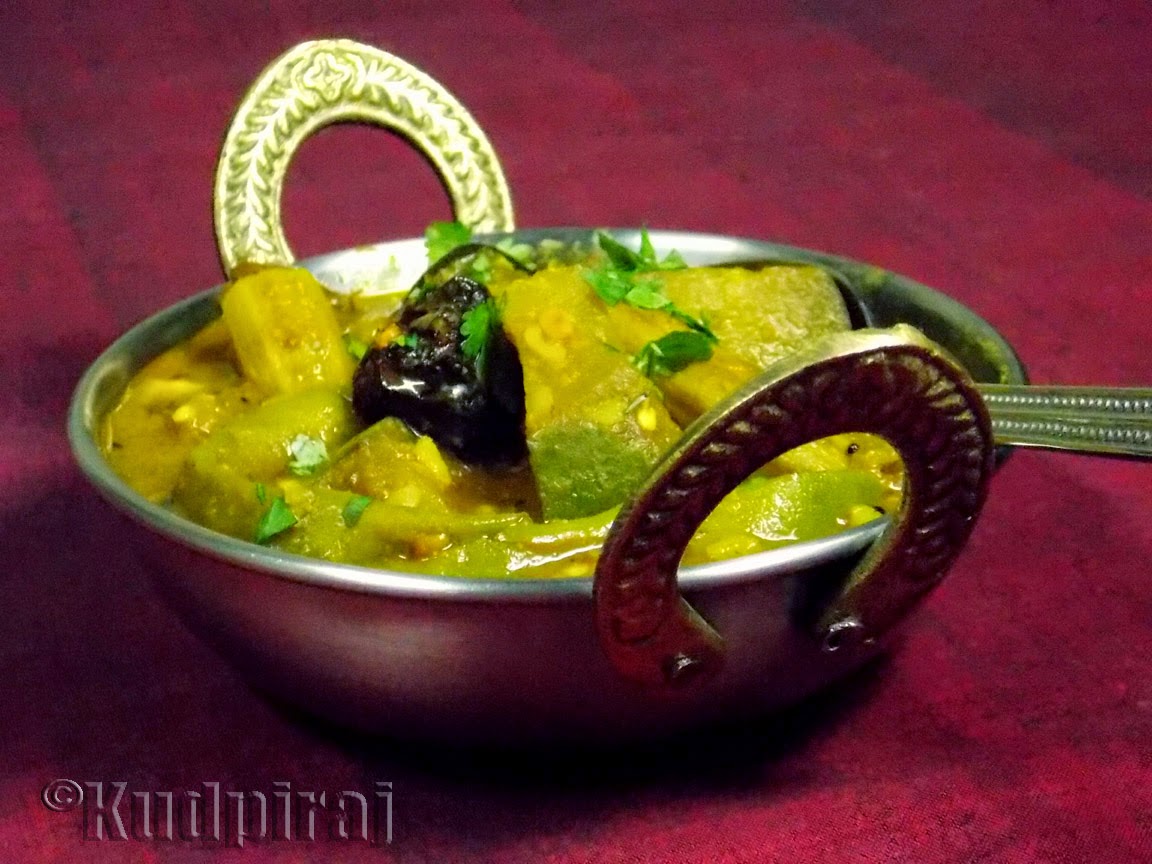 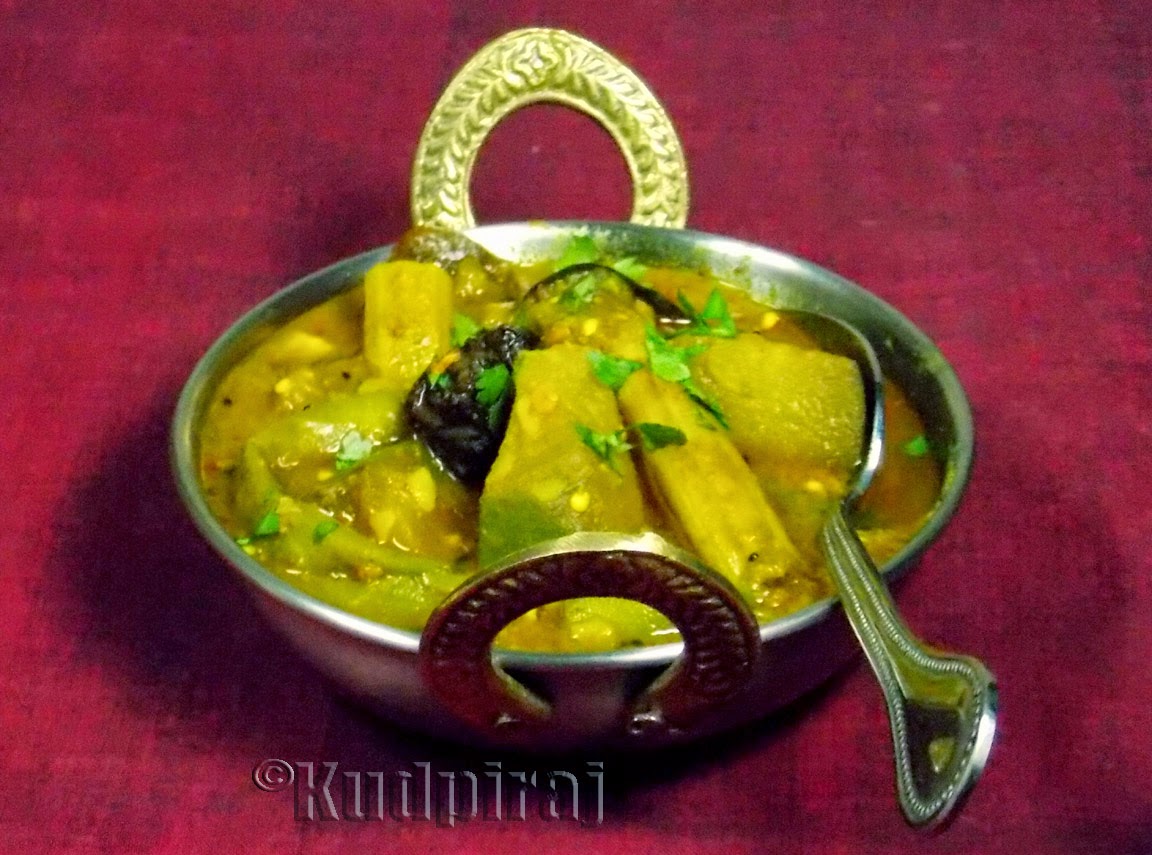 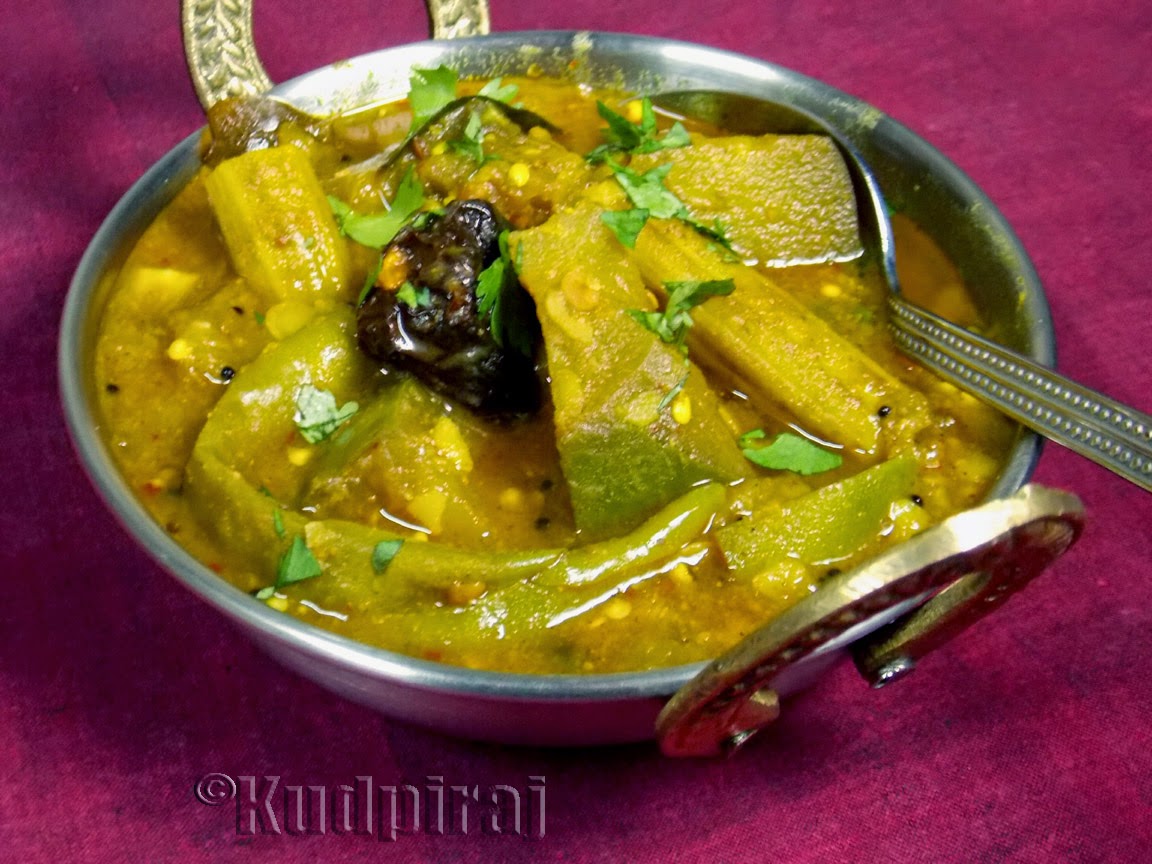 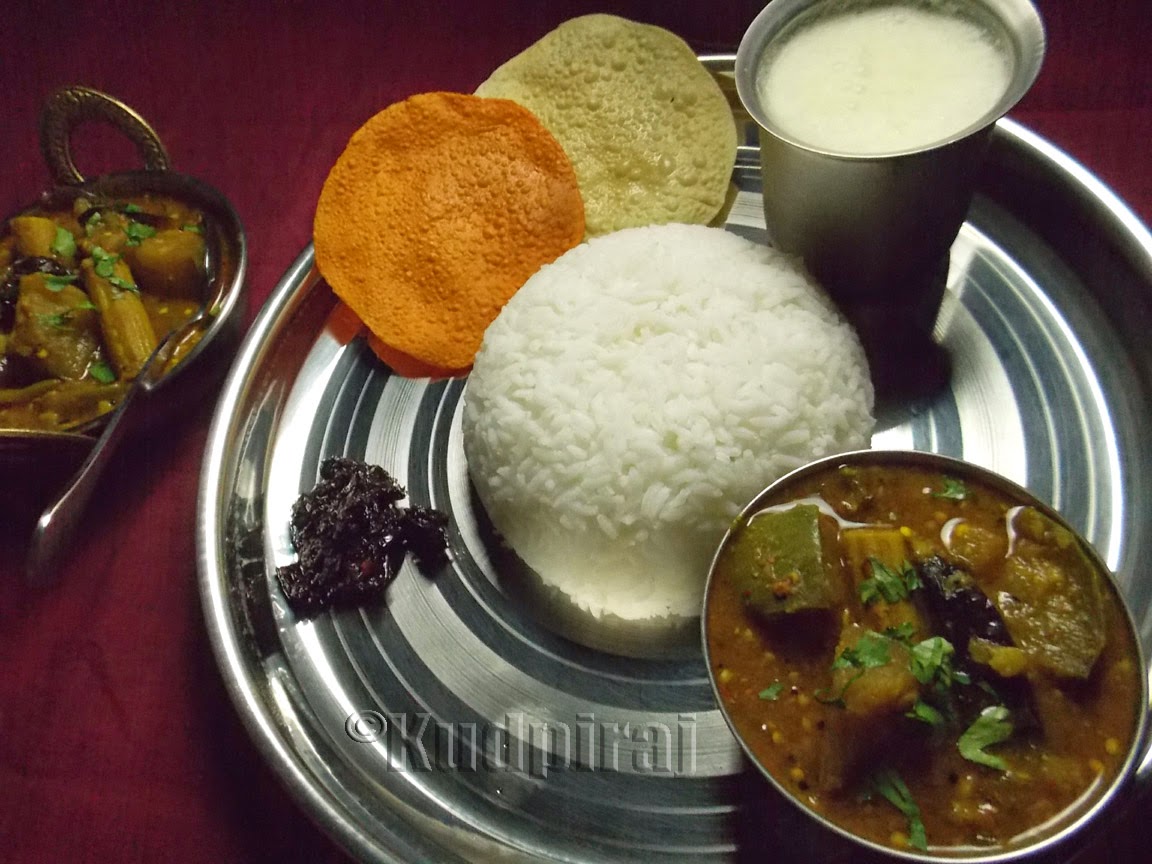 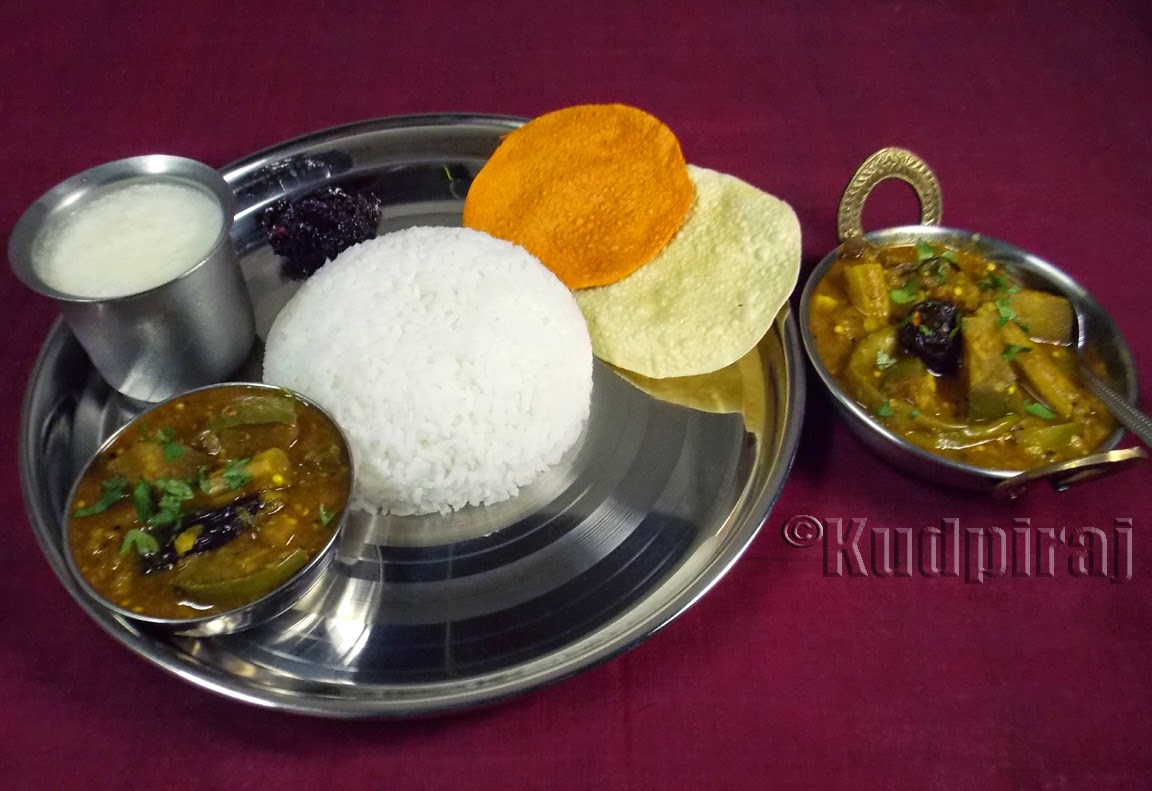 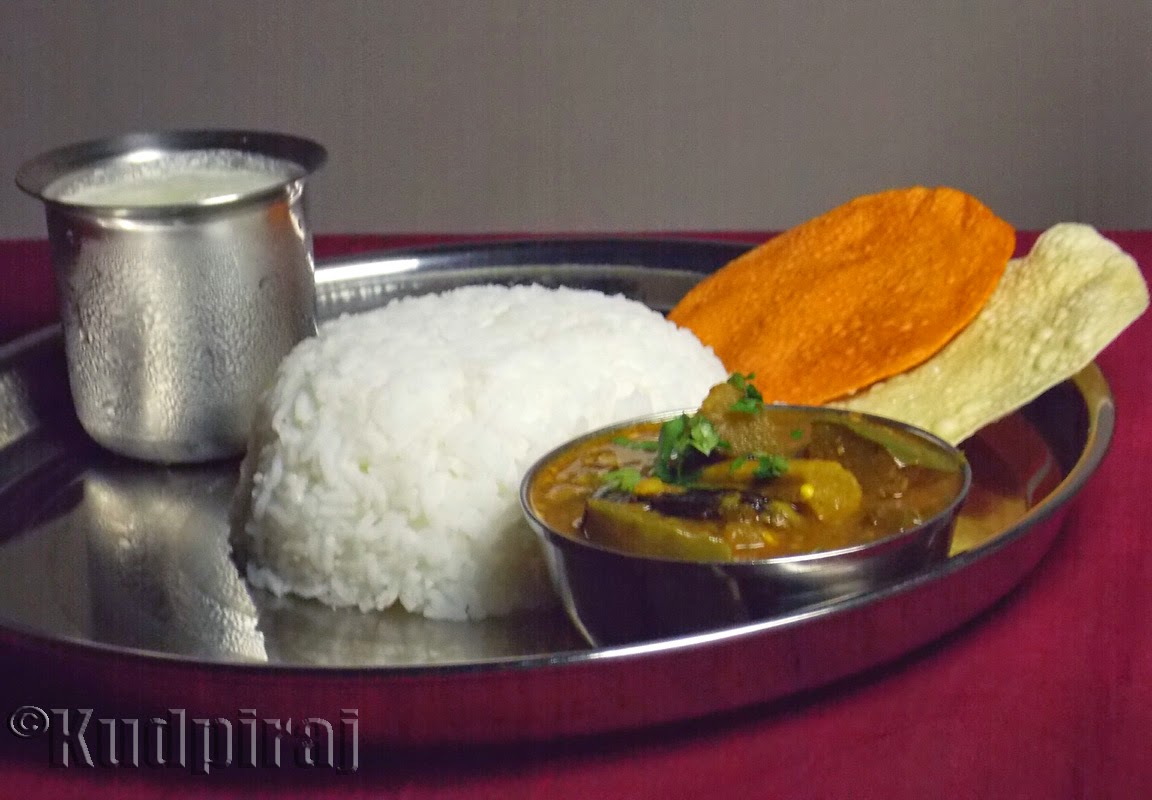 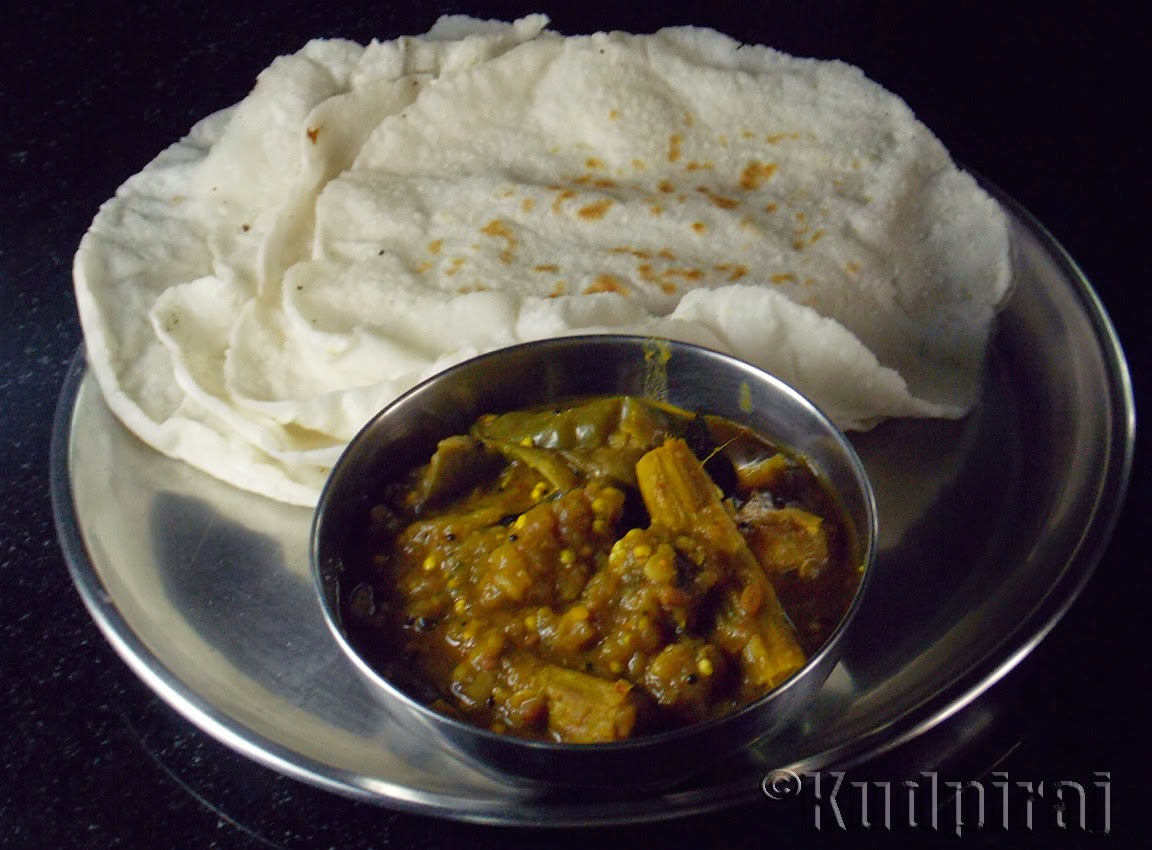 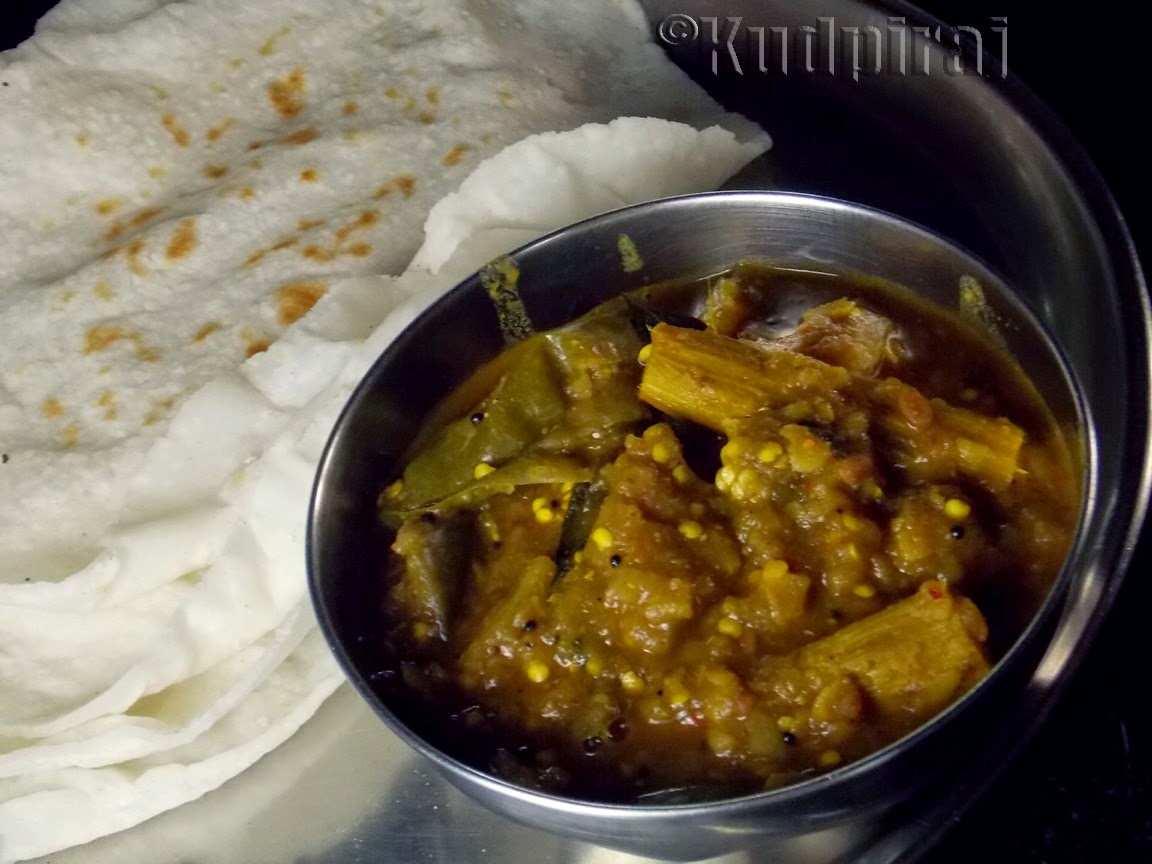