"Happy Makara Sankranti/Pongal to all!" 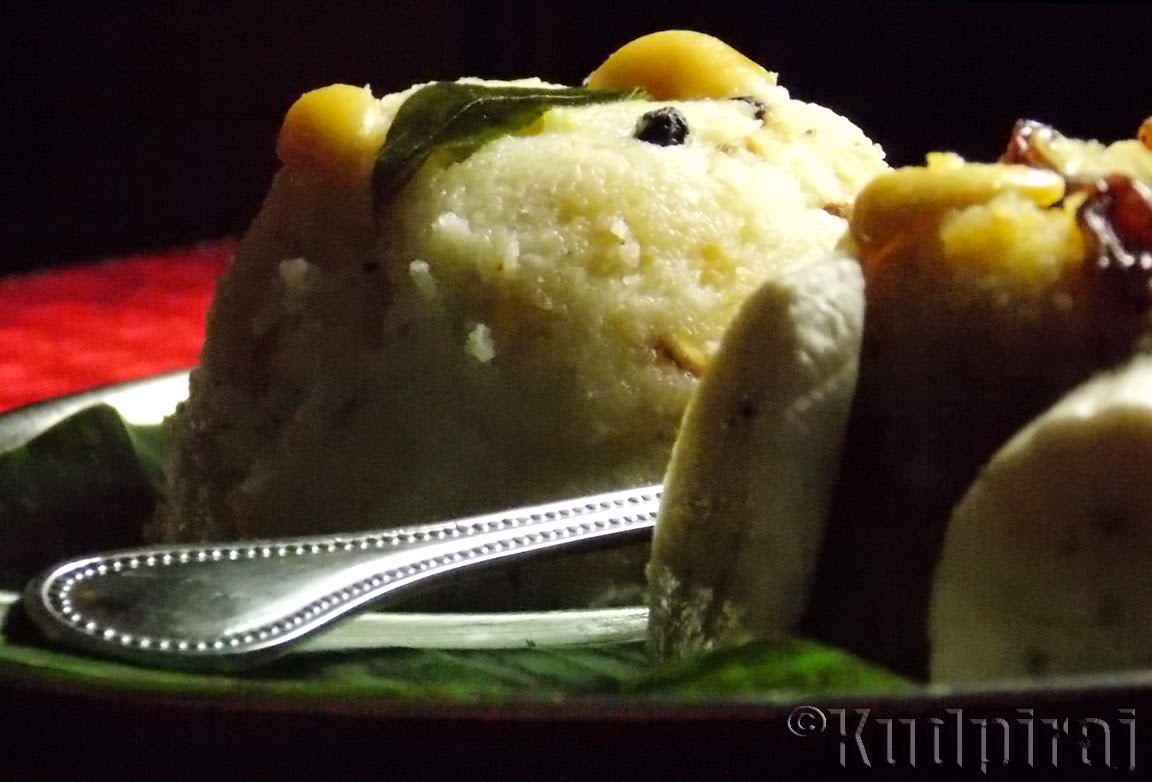 "Let's try Aiyer's Hotel today Shenoy. They make nice idli, vada, dosa and pongal!" said my fellow train companion Vijay Kumar, employed in Indian Bank Chamarajanagar. We had just reached the town around 9:20am and I was thinking about having breakfast in a good restaurant. I was working for a bank myself those days in 1979-80.

Vijay Kumar had good knowledge about restaurants in Chamarajanagar, as he was travelling from Mysore to that town daily for at least 2 years before I joined for duty there. Being a Tamilian he also knew where we get good South Indian breakfast. So I agreed and we reached a traditional semi-tile roofed house with a garden in front. We entered the place, found a clean table and occupied the wooden chairs. The ambiance was cool like an a/c room!

A waiter wearing mundu and half sleeves shirt came to our table and we asked him what's hot. He said, Idli, Vada, Dosa, Rava Kesari and Rava Pongal. I ordered rava kesari and pongal, while Vijay Kumar ordered dosa. We were not disappointed. Vijay Kumar was right. The Rava Kesari(Kesari Bhaat) and Rava pongal tasted too good for words! They also served tangy spicy sweet tamarind gojju as sauce with the rava pongal. I felt so good, I ordered one more rava pongal and satiated my hunger. The strong fresh filter coffee did full justice to my breakfast that day!

Aiyer's Hotel was my favourite joint for breakfast ever since. Then in August 1980 I got transfer to Bangalore and I didn't visit Chamarajanagar after that!

When I settled down with Meena as my life partner, I used to tell her that I must visit Chamarajanagar and taste that rava pongal some day. She said, why not try that at home. I was good at making khaara bhaat and uppumaavu those days in the late Eighties. We were also making rice pongal frequently. So, I tried my luck and somewhere in the early Nineties, I tried and succeeded in making the perfect Rava Pongal!

That was only once in the Nineties I made it and then a couple of attempts in the latter half of the new Millennium. I almost forgot that the snack existed for the last 8 years! Then today, as I was telling Meena that we must make sweet and savoury pongal for Makara Sankranti, for the benefit of our followers, she said why not try the good old Rava Pongal along with the Aval Sakkarai Pongal that I was planning to make today for brunch. I thought that's great, and here it is, my recipe to make Rava Pongal. I did peep into Padhu's Kitchen and noted her recipe, but that was not my kinda stuff. I wanted it exactly like I had made earlier. Only difference I found was, I had added chopped green chillies in my old recipe but Padhu's Kitchen says, add chopped ginger. That's a logical idea and I adapted that in this recipe. You can serve this with sweet pongal and have a hearty tasty breakfast or brunch. 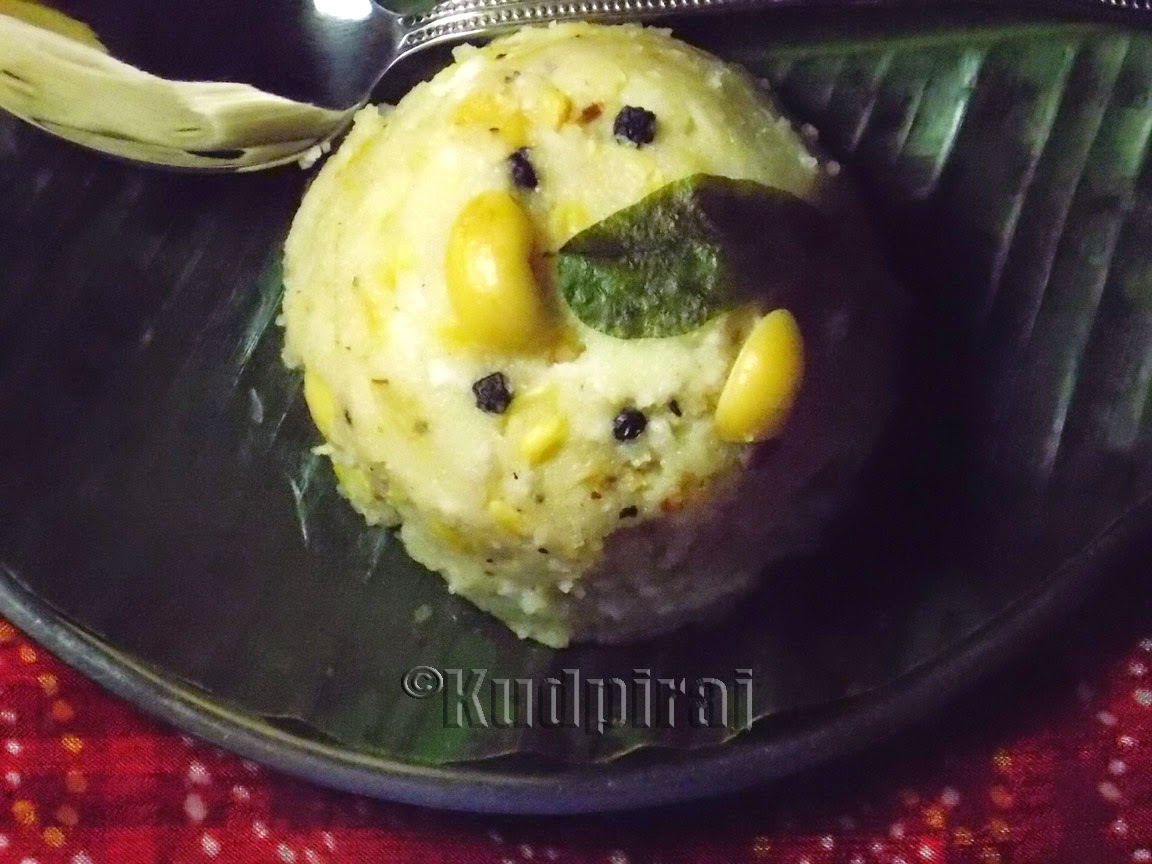 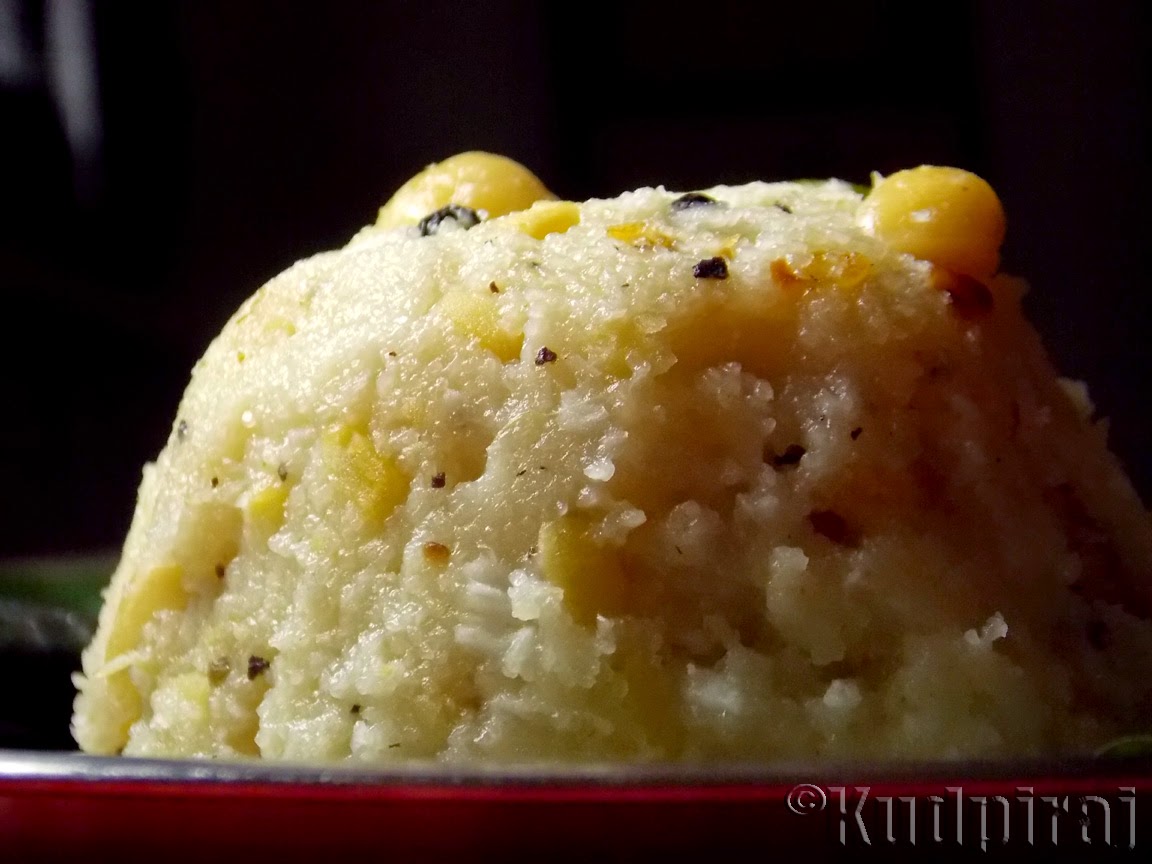 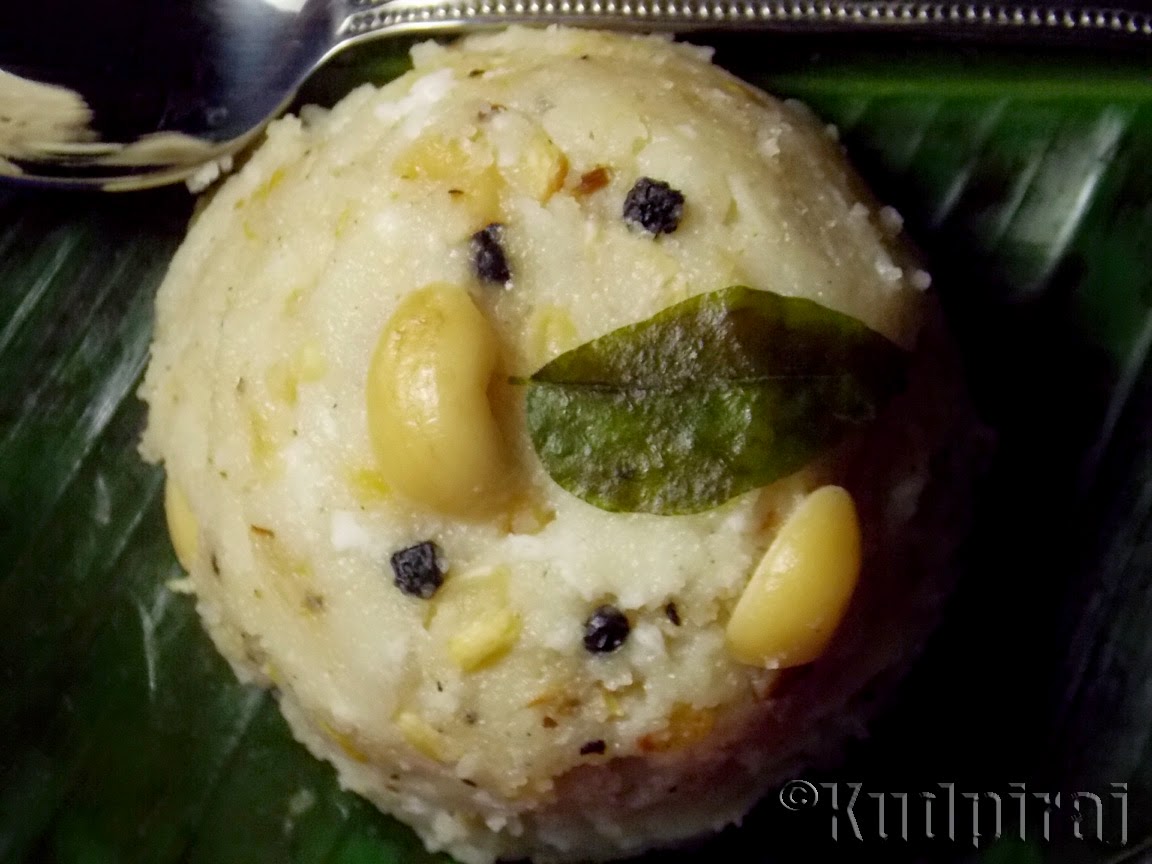 Method:
Dry roast moong daal and cook it with little water till tender.
Heat ghee, add cashew bits, whole spices, chopped ginger, curry leaves and fry.
Add crushed peppercorn and cumin powder, followed by rava.
Roast on slow flame till rava is crisp and aromatic.
Add boiling water carefully, as it tends to spurt out.
Add the cooked daal with water, sugar and salt.
Simmer, mix in optional milk and allow rava to expand almost three times.
When the pongal is still wet and sticky, switch off the flame, sprinkle grated coconut and place the pan on the kitchen platform to cool down for 5 mins.
Mix well and serve hot with spicy sweet and tangy dates tamarind chutney/gojju. 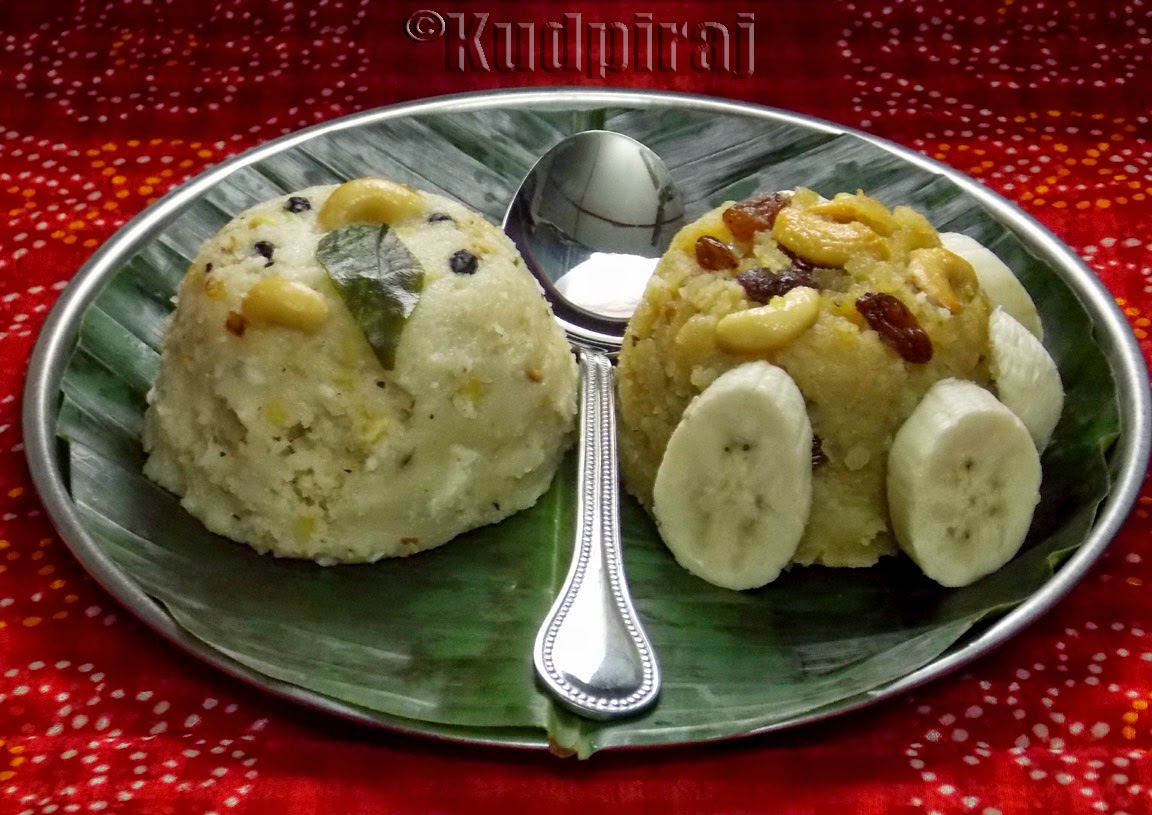 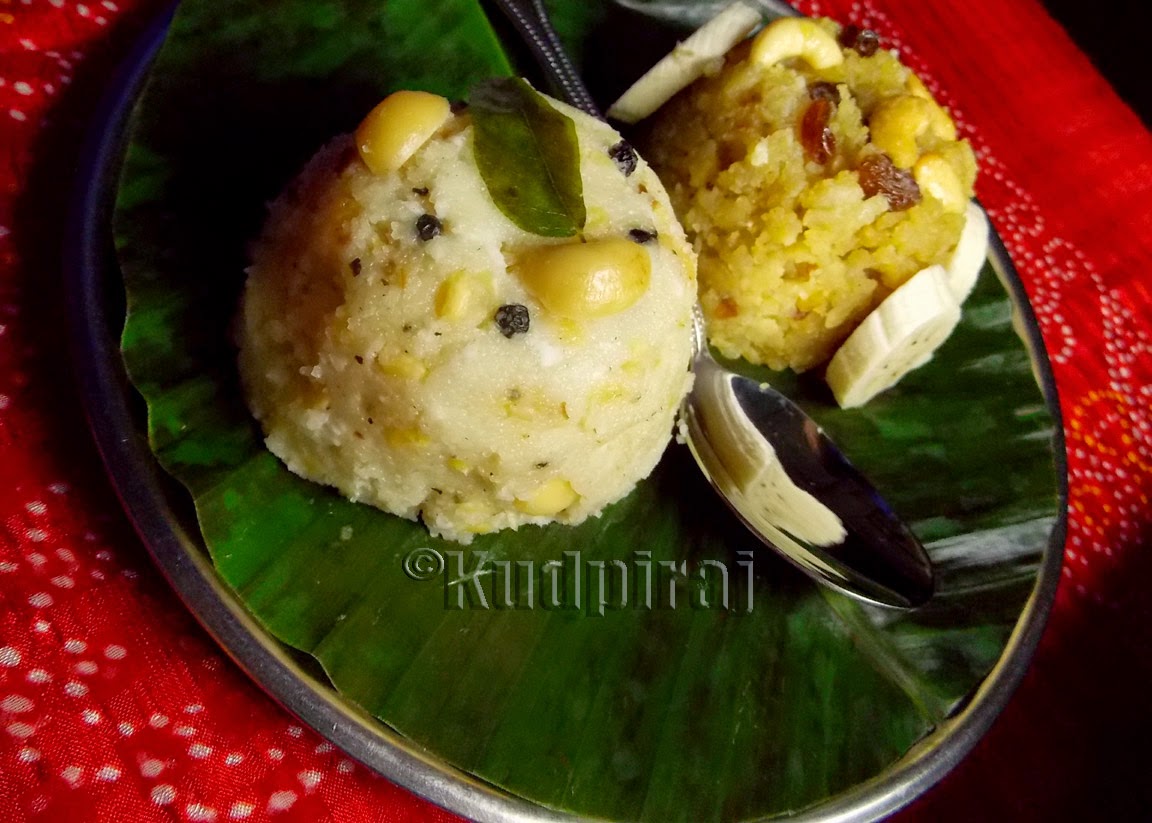 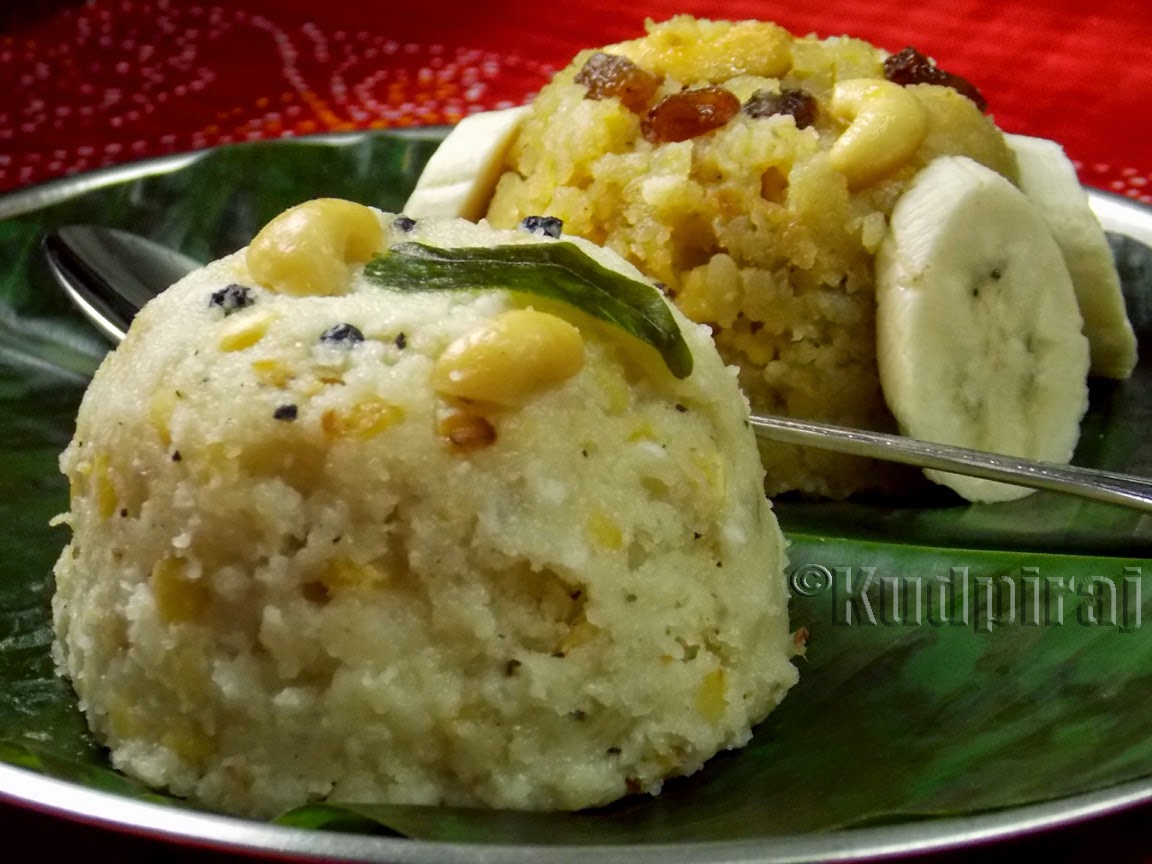 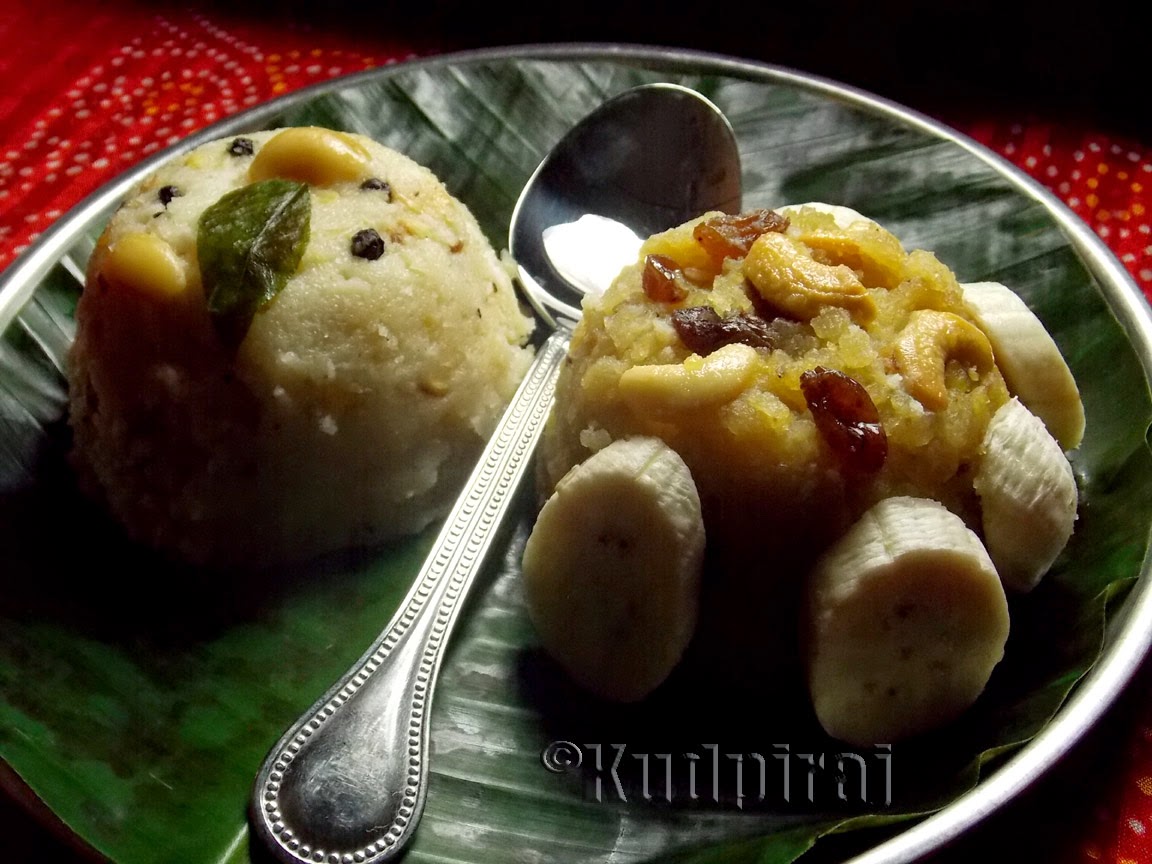