If It's Chattambade, This Must be Agumbe

There was a movie in the late Sixties by name 'If It's Tuesday, This Must Be Belgium'.

Thinking in that line, I am tempted to coin in the phrase, 'If It's Chattambade This Must Be Agumbe'. It is not because Agumbe is famous for Chattambade, or that every food outlet in Agumbe sells Chattambades. One man however, has been making hot chattambades(Lentil vadas) since last 21 years. Mr Padiyar, the friendly bearded chap in his mid Fifties from a small town called Dodderangady near Karkala, has settled down in Agumbe on the Western Ghats and he does brisk business selling them goodies on his 'Fast Food' cart canteen. 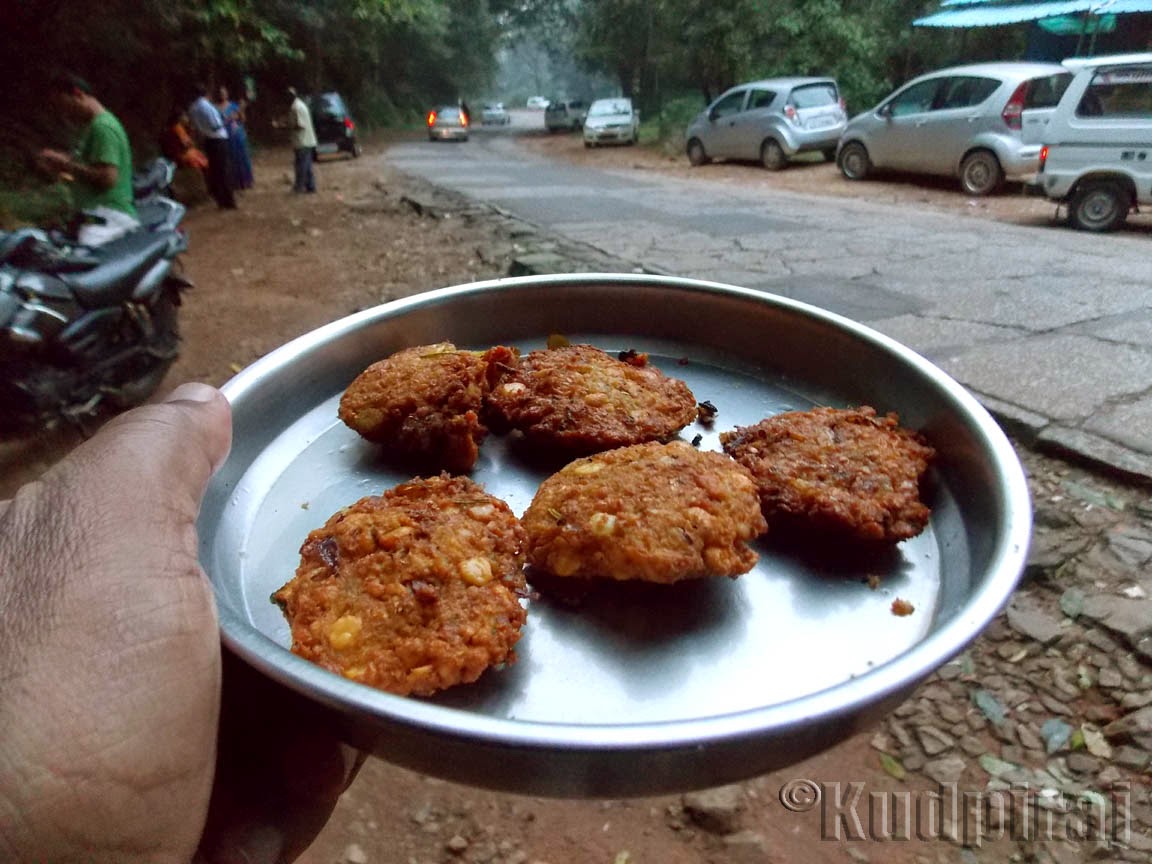 Though I have travelled many times via Agumbe to Shimoga and Koppa in the past two decades, I came to know about him just a year ago, when a friend told me about the crisp and spicy lentil vadas he makes, that sell like hot cakes.  He also told me that the Chattambade Maam(Uncle) makes idli vada and tea to satiate the hungry tourists who pass by or visit Agumbe in the morning and evening.

After negotiating the 14 hairpin bends of the Agumbe Ghat, as you move a few yards towards the town, you can see his cart parked on the right just before the forest check-post. You can also see many cars parked on the left side and people swarming the canteen watching him frying them crispies as he keeps chattering about how he's been running the fast food joint single handed since the last 21 years, how an ordinary guy like him became famous when knowledgeable people wrote about him in papers, magazines and online. 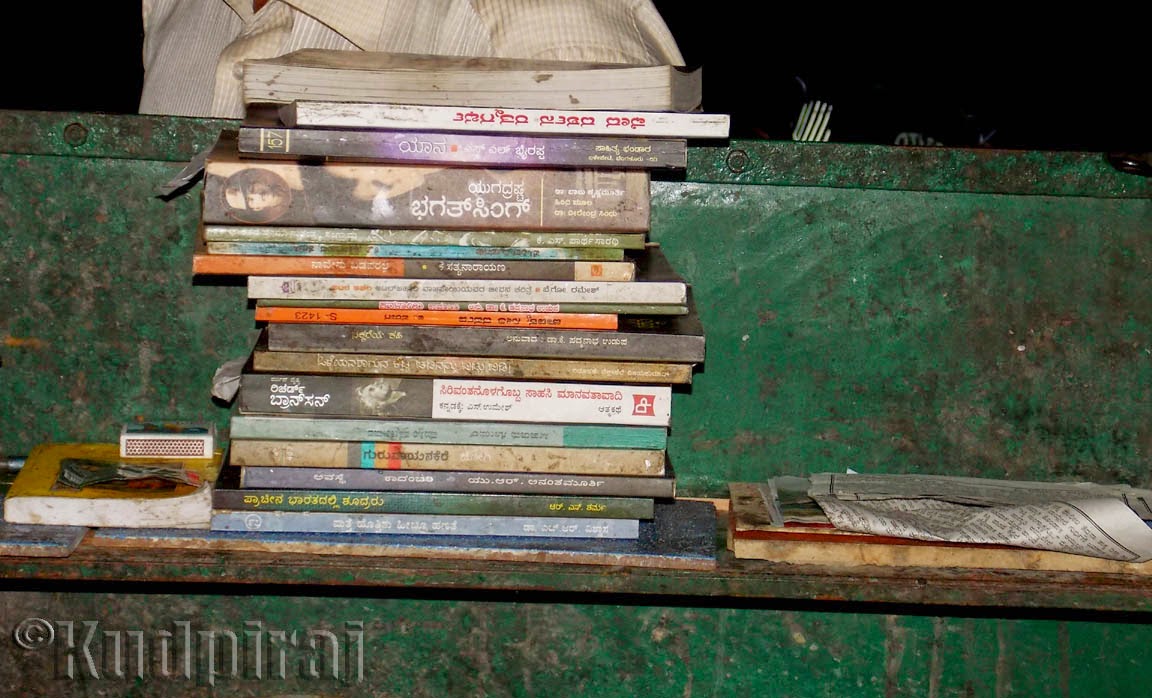 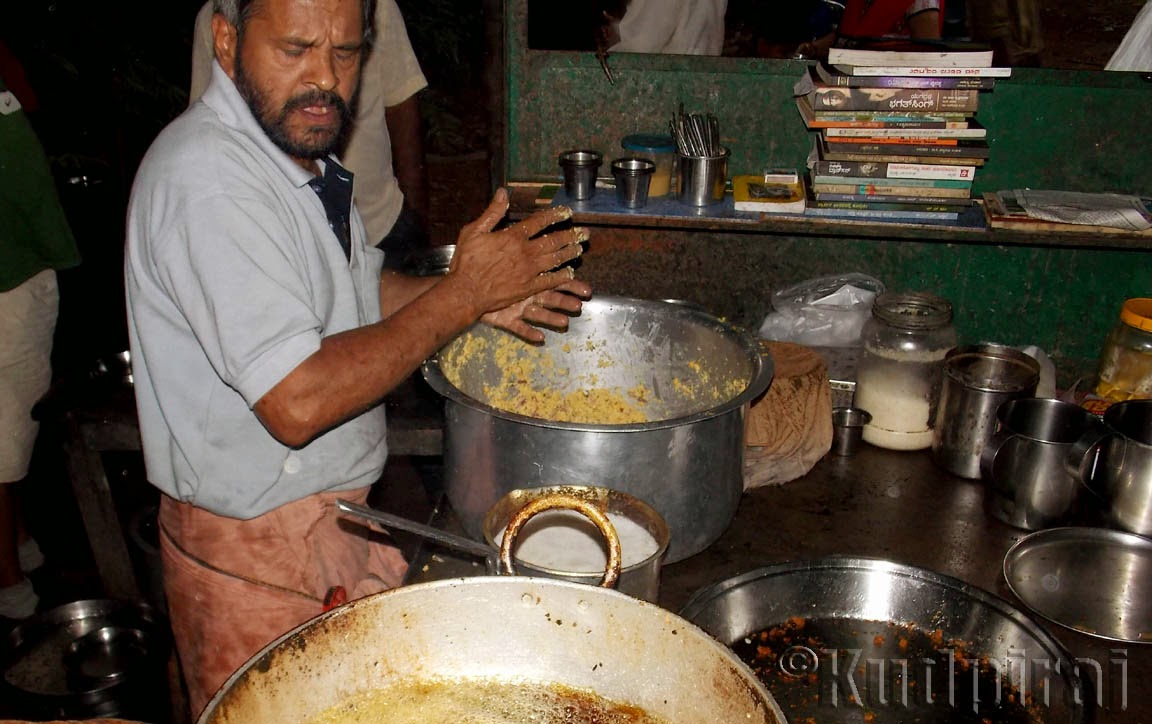 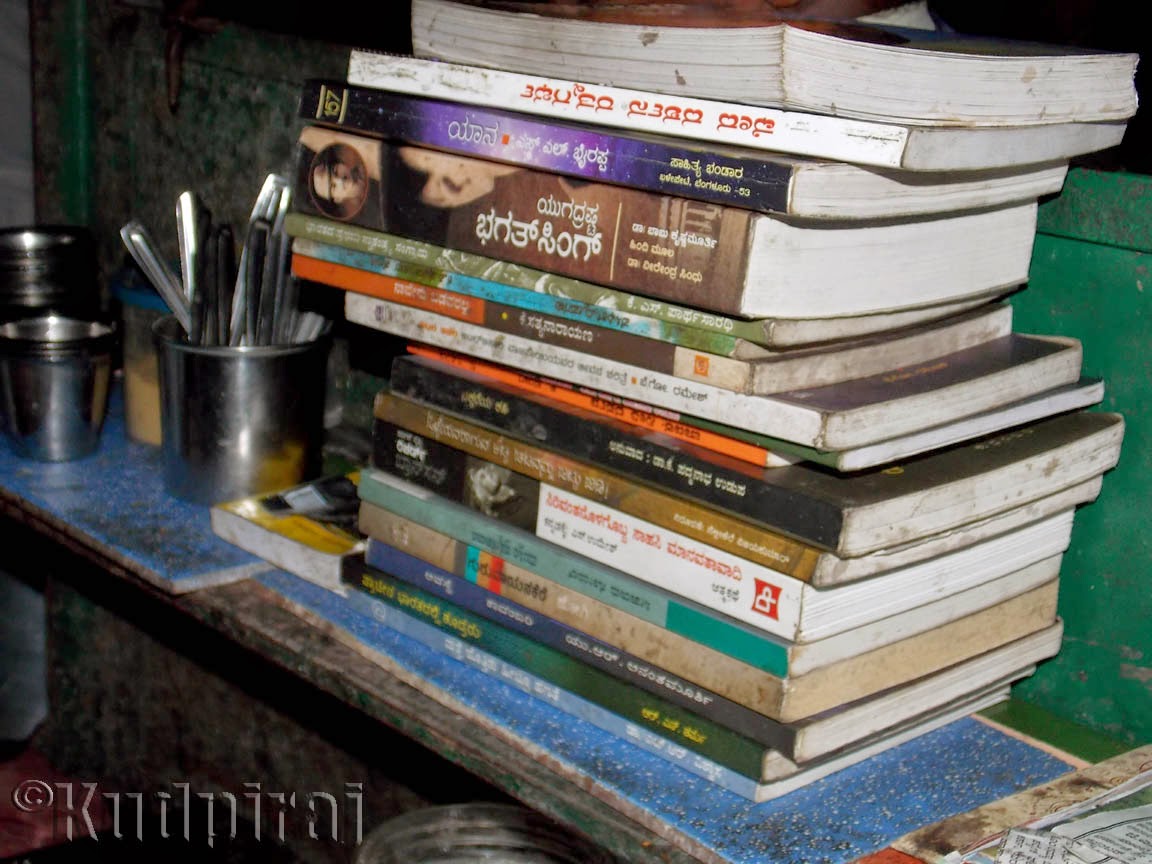 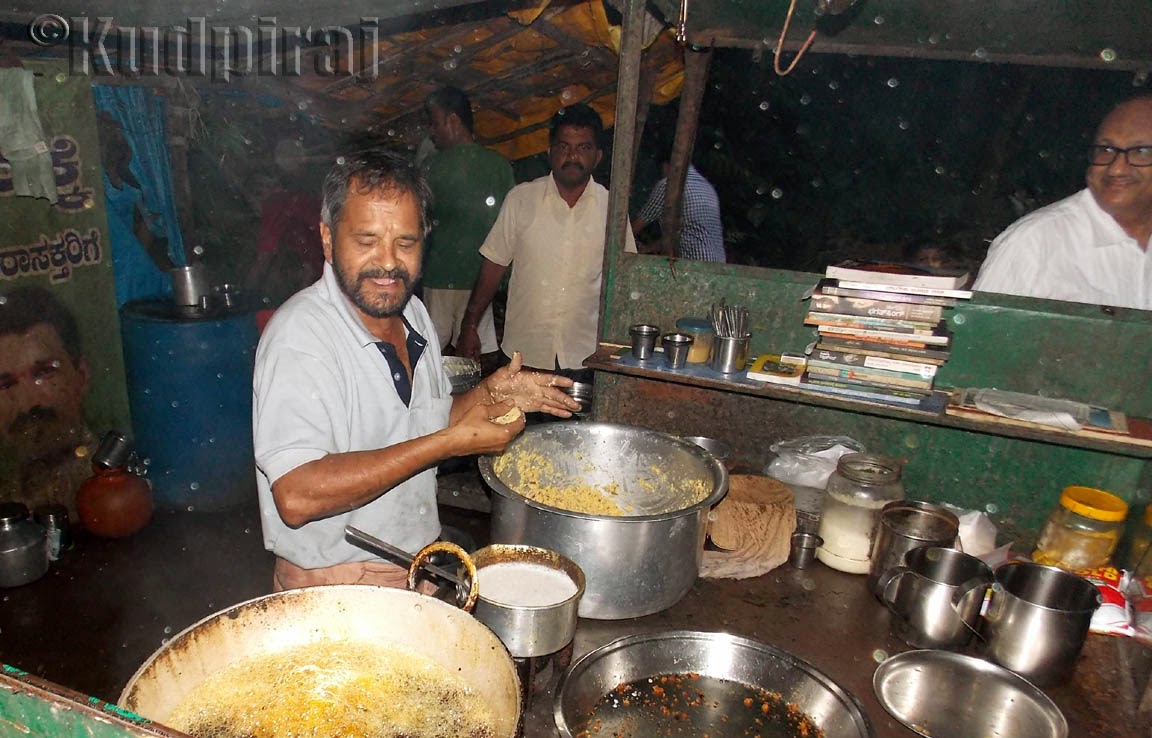 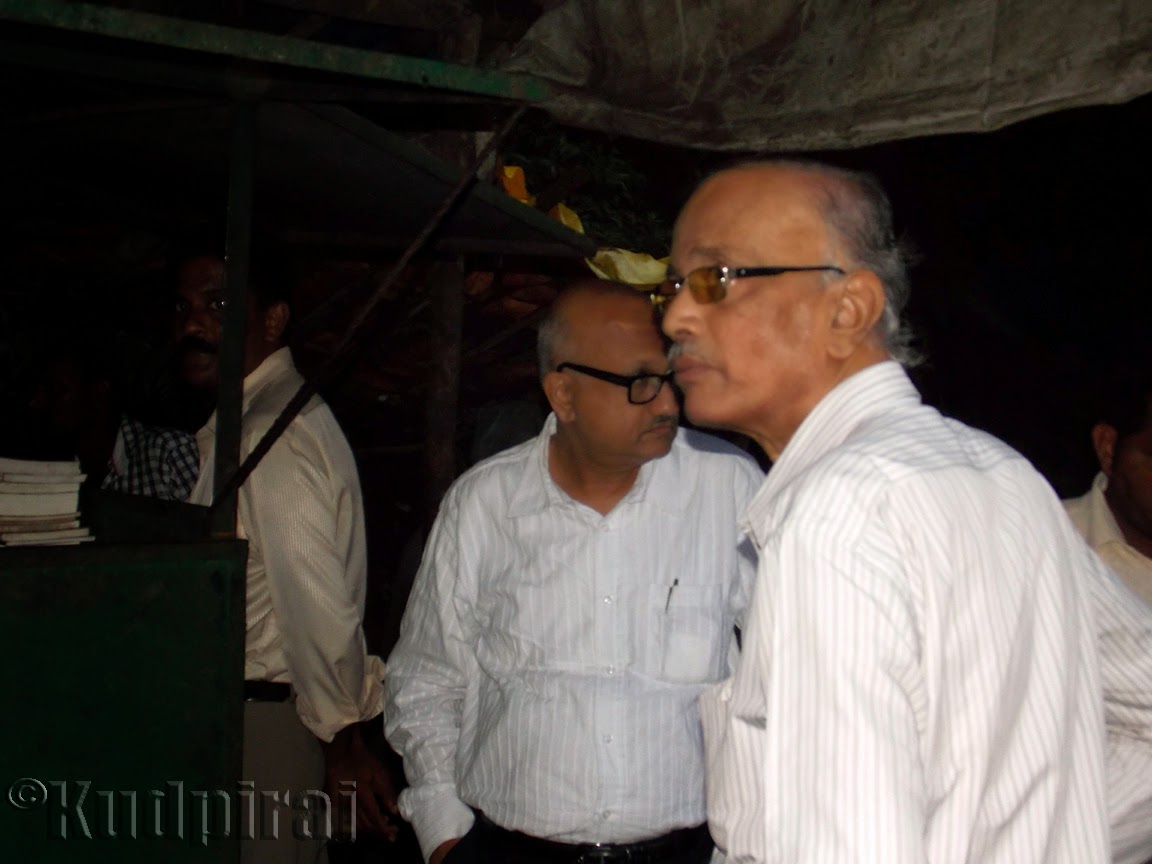 You can also see a stack of Kannada books on philosophy, spiritualism and patriotism by famous authors kept on the edge of the cart which inspire him to render selfless service to mankind in the same style that he did over the years after he settled down there in the early Nineties.

"Please don't forget to take pictures of these books along with the chattambades and me. These are very precious and are inseparable part of my life. They inspire me to work hard, and that's why I have kept them here along with my cooking implements", he emphasises the need to highlight them books.

Padiyar prepares the ingredients necessary for the fried snacks at home, packs them in batches in plastic bags, empties them batch by batch into the vessel in which he mixes the ground lentil coconut chilli paste along with calculated amount of chopped greens and onions, then drops small flattened balls into the sizzling oil and fries them and tosses them over the oil on the perforated frying ladle to check if they are crisp. They get sold instantly to the waiting crowd who gobble up 2-4 vadas each and wash them down with a small steel tumbler full of hot strong invigorating tea or kashaaya. Some people who come in groups order anywhere from 50 to 100 vadas at one go, but wait patiently as he caters smaller portions to others. 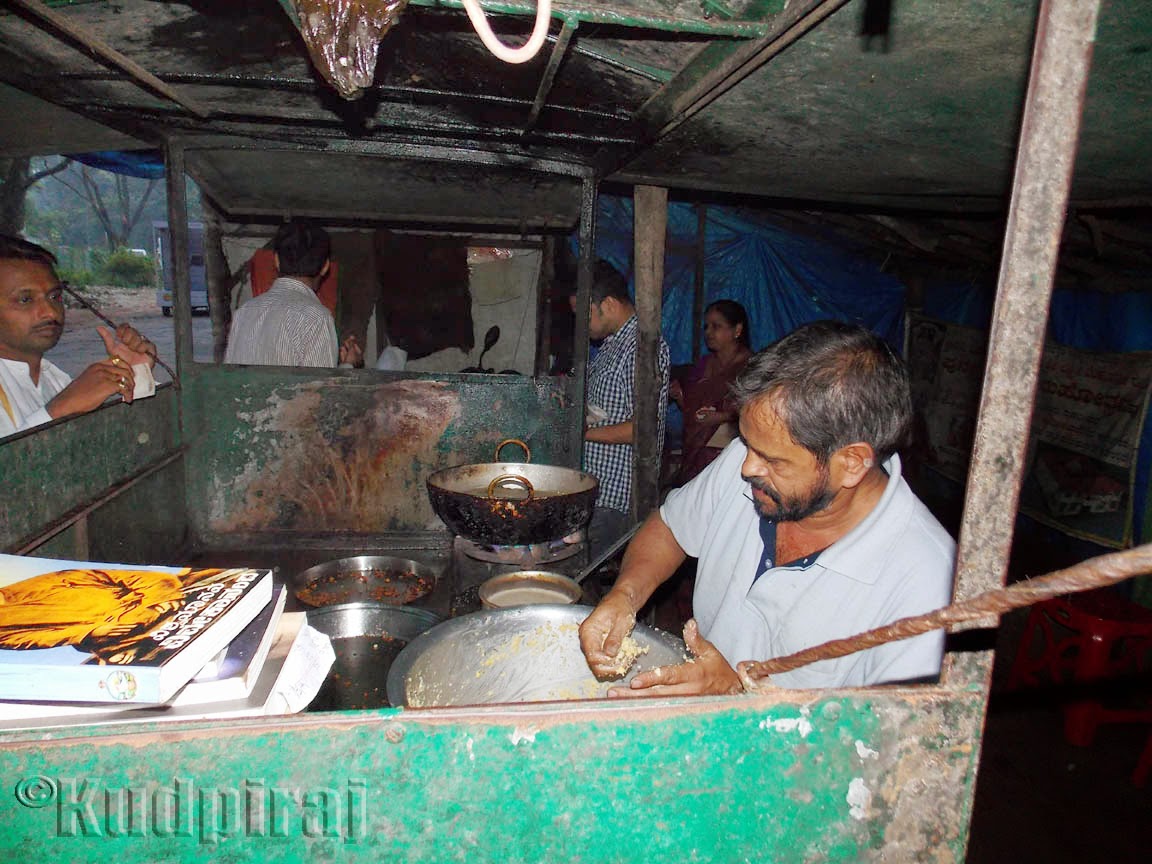 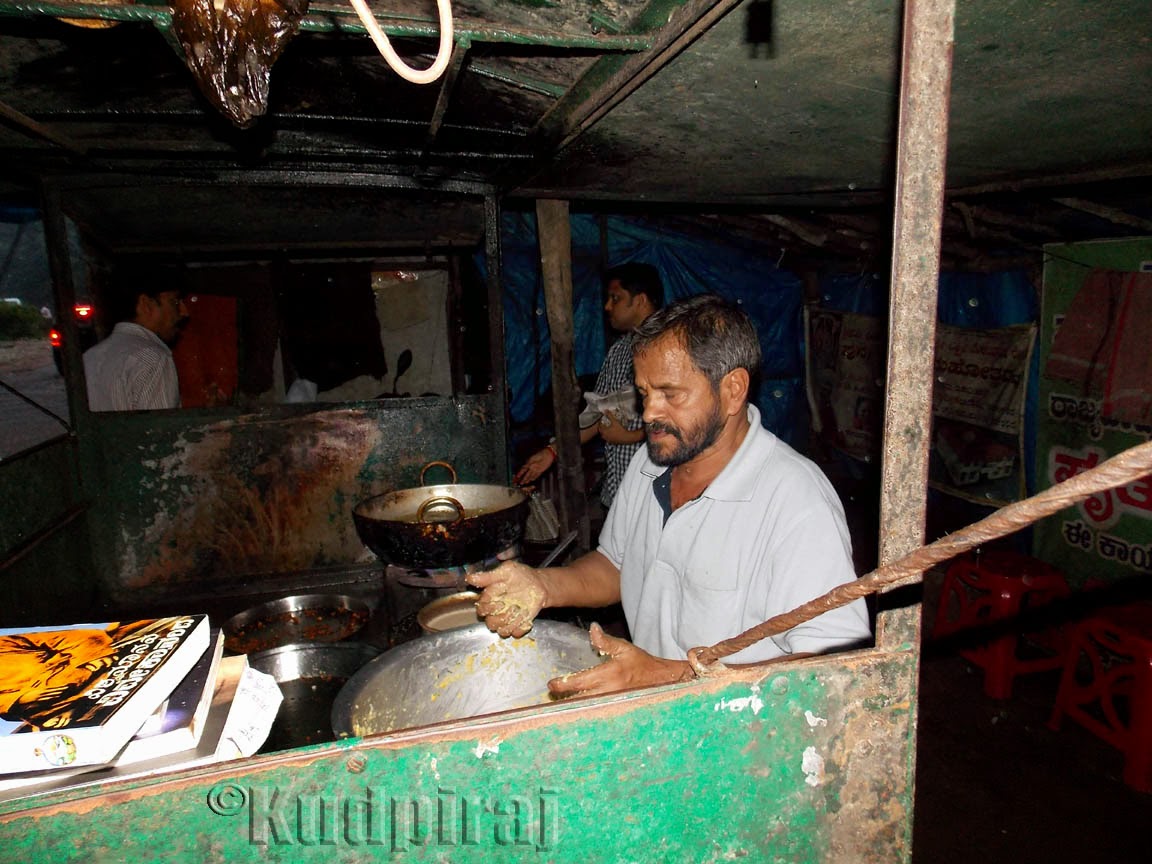 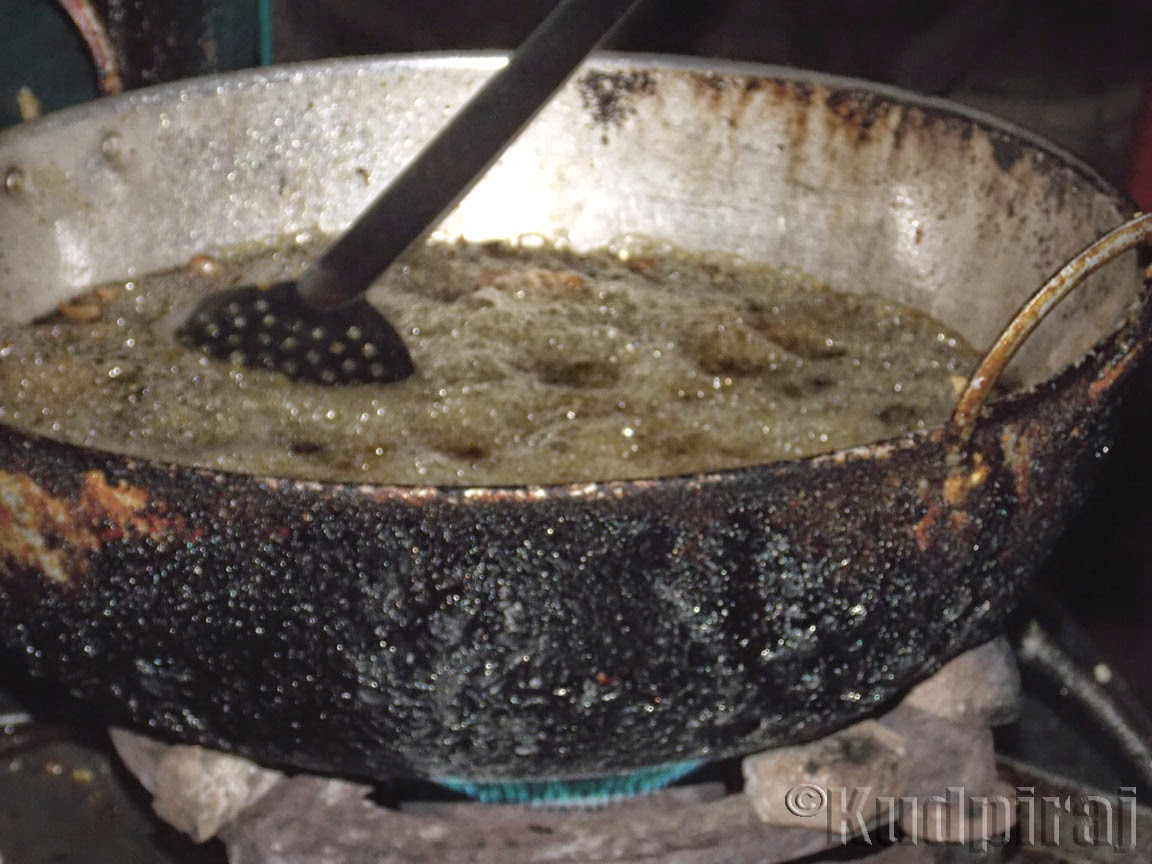 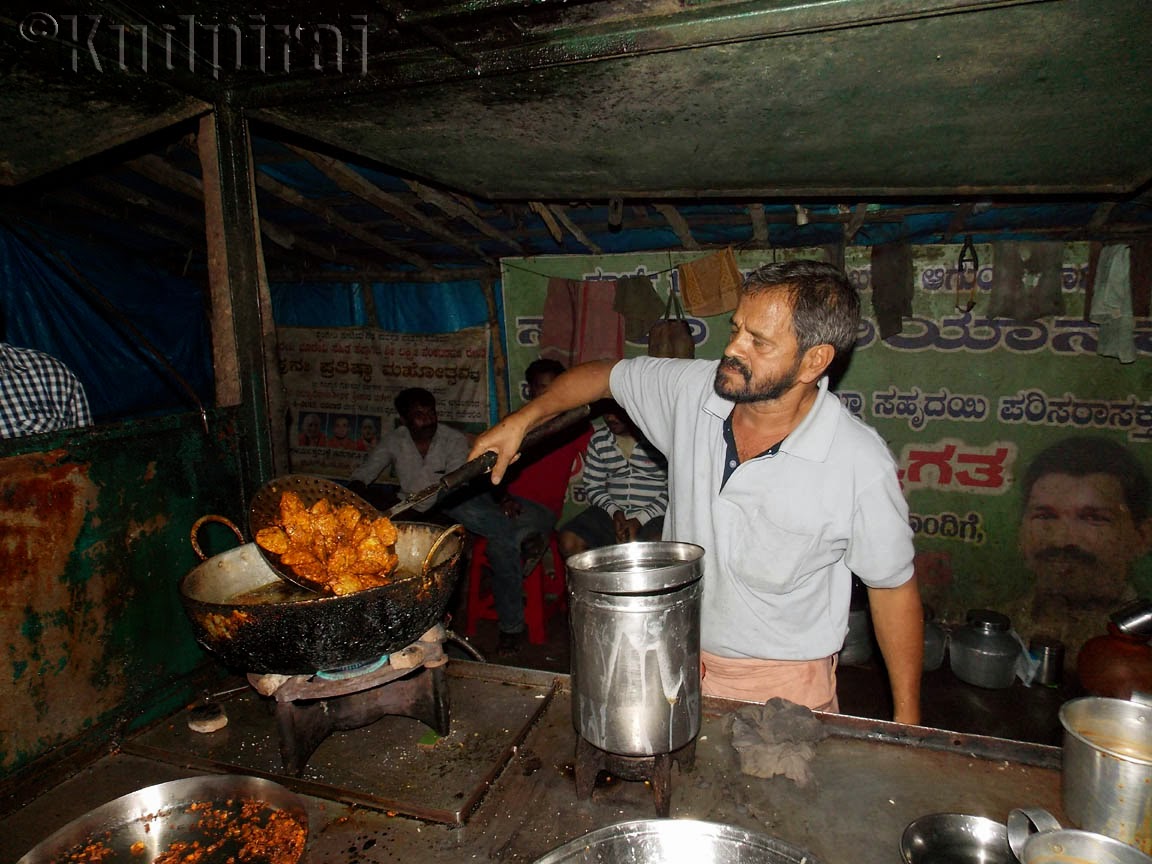 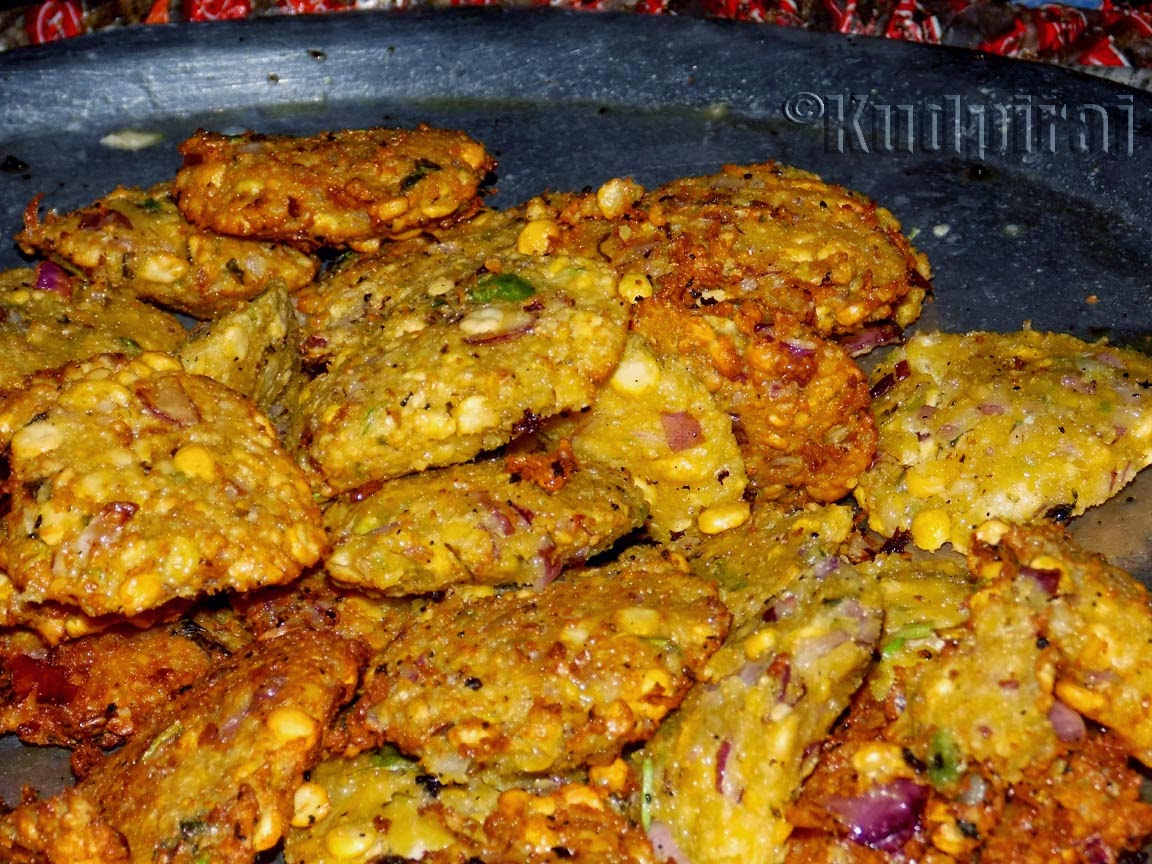 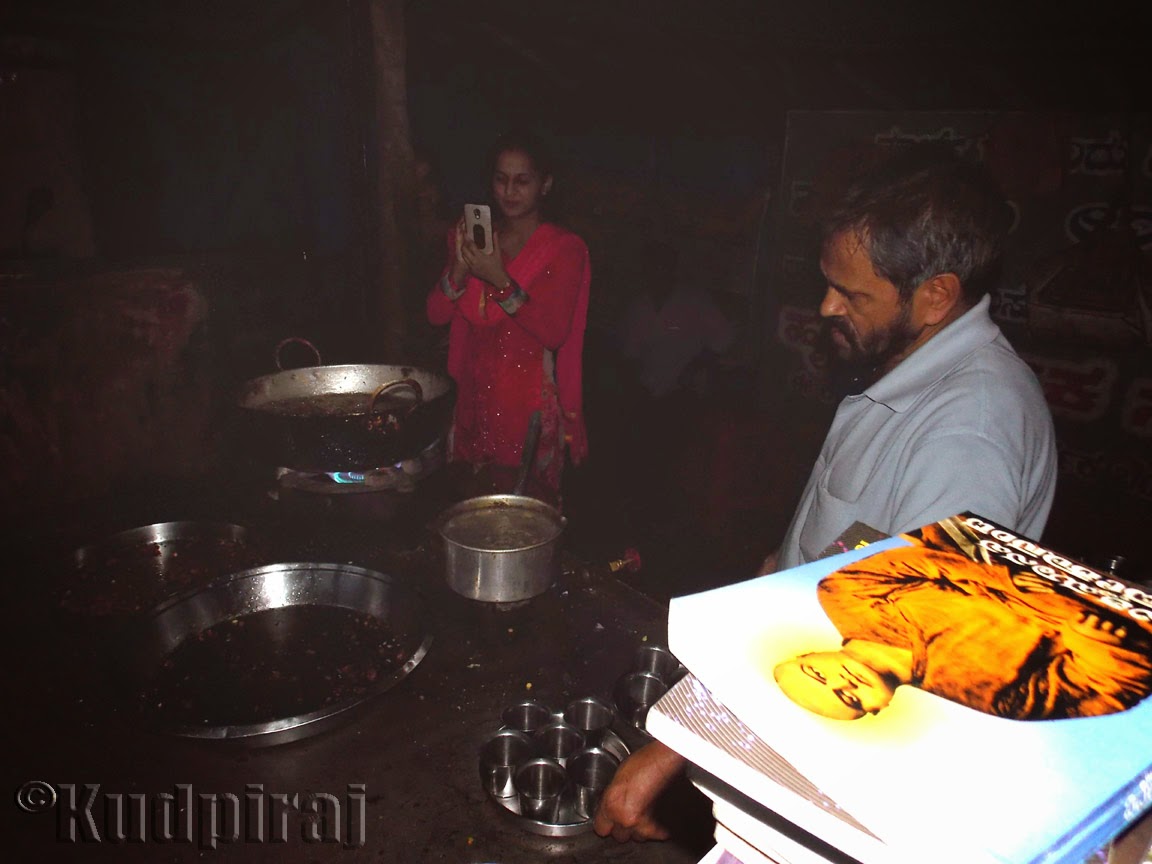 I asked him if he sells over a Thousand chattambades per day, for which he shyly answered "May not be so many. Can't say for sure. I myself don't keep a count, but whatever I prepare, gets sold out soon after sunset and I return home with all the contentment of catering to hungry people who want fresh hot stuff".

We missed his canteen on our way to Shimoga on November 1st in the afternoon when he was off for lunch. We made it a point to reach Agumbe well before sunset on our way back  the next day, and felt lucky to taste them. Same vadas may not taste as good at any restaurant in a big city, but the cool natural forest ambiance of Agumbe with a light drizzle of monsoon or a whiff of cold autumn wind make them favourite with the travellers. Besides, Padiyar's endless chat with rhyming poetic dialogs influenced by the books in store add to the fun and make us feel good.

I told him, "I will make you a star online, as we food bloggers focus more on street food and highlight hard working traditional fast food sellers more than star hotels. Tell me, what makes you tirelessly work single handed for such a long time? Don't you have children who support you?".

He smiled and said in a rather humble tone, "I have three children and all of them are good at studies. Two girls have already completed engineering and are working for IT Companies in Bangalore. Youngest one, my son is also a distinction student. I feel lucky to have all the three of them brilliant, but I always believe in being with the common man, among common people, serving them, seeing their happy faces, seeking their blessings and good wishes. Almighty listens to my devotional chants(Bhajans) and graces me all that extra energy to serve people."

Before we left, my wife Meena asked him whether he had any urge to expand his setup in the past like many famous people who started with batata vada, bhelpuri and sweets in as street vendors owning chain of restaurants today.

I thought of completing the limerick by adding my own line  ".....mattu namage adey roodi"(....and for us, it's way of life), but reserved that for expressing in my blog, for I was his client for the very first time in those 21 years!

I have seen many street cart canteens in my life, this is one more, yet there is no second Padiyar anywhere in the world, chatting and making Chattambades quite like the one near Agumbe forest check-post! 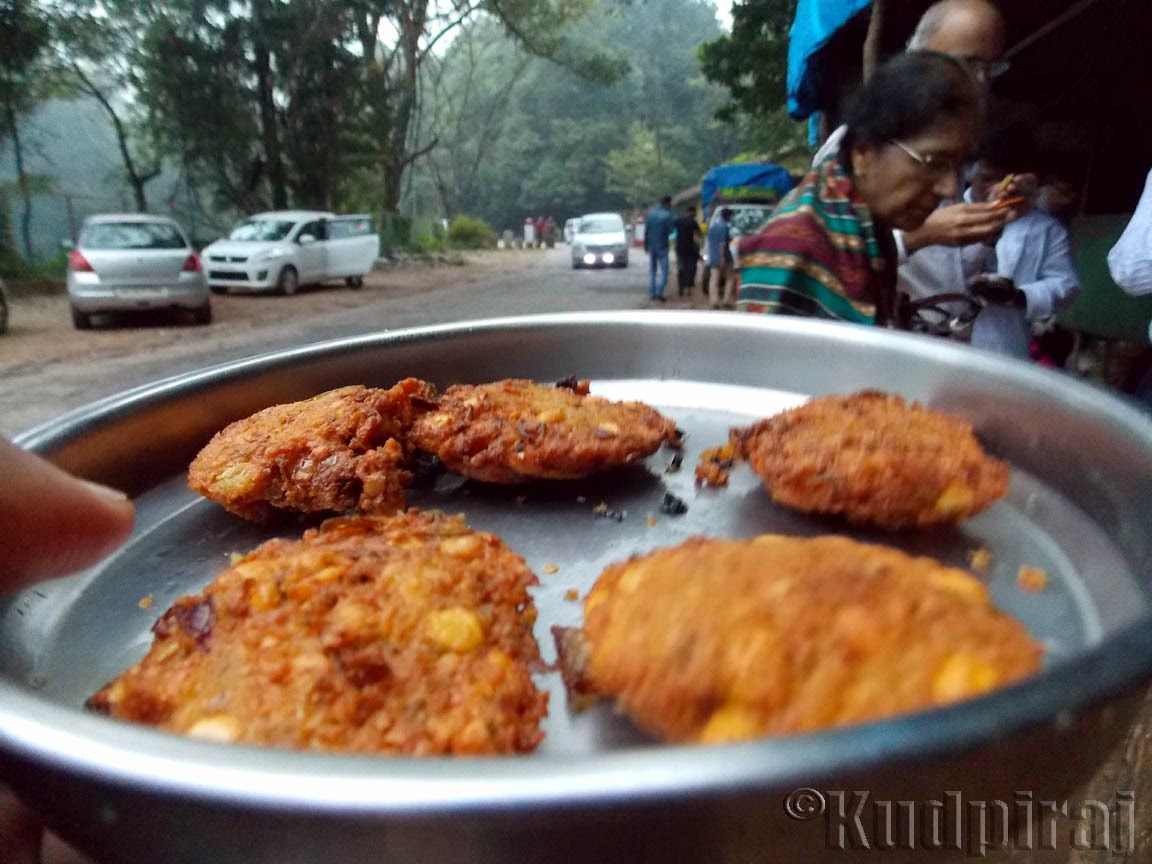 during our PG days, whenever we had free time (read three times in a week) we would go to agumbe on bike, eat chattambade and kashaya, sometimes vade if it is available and then back to udupi. sitting on those stone pillar and eating those vadas are no less to heaven

Mr.Padiyar's charm & food are only memories now.. He passed away after a brief period of illness yesterday.. His memories will live on forever. May he rest in piece..

Padiyar mam passed away on 28th June, 2015. He was suffering from dengue. Unbearable loss to many like me who never proceeded further without tasting his yummy chattambade time and again. May his soul rest in peace. We can never forget you padiyar mam.